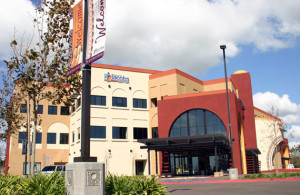 Most people in the Southeastern San Diego community know of the Jacobs Center through its support of community projects, the Market Creek shopping complex, its support of community events such as concerts, conferences and events its facilities and the provision of space for some key programs such as the United African American Ministerial Action Council and the National Association for the Advancement of Colored People (NAACP). Until recently the Jacobs building provided space for Coming Home to Stay and several other programs supported with funds and space from the Jacob’s Foundation. The organization which at one time employed over 125 people, last week had a massive layoff as at least 32 employees in all departments were terminated.
According to Mr. Reginald Jones, president and CEO of the orgnaization, the layoffs were across the board in the areas of Sales and Marketing, Security, Administration and Community Engagement. At the same time that the dismissals were taking place, it was stated by some of those fired that new hires were taking place in some of the areas in which they were being terminated. Mr. Jones, in an interview with the San Diego Voice & Viewpoint, confirmed that some new hire notices were being posted and that those persons laidoff would be able to apply as positions go up. Mr. Jones said the layoffs were necessary and are apart of a mandatory restructuring taking place. Jacobs owns 62 acres of land, 52 of which have not been developed, but carry the expenses of taxes, insurance and interest, according to Mr. Jones. There has been no development since 2008, and the redevelopment funds in the state of California have been eliminated by Governor Jerry Brown; Mayor Kevin Faulconer’s recent appointment of Mr. Reese Jarrett as President of Civic San Diego and the statement that the development of Southeast San Diego is a priority, does not carry with it new dollars but rather the need for the development of more private sector investment to make the decision a reality.
Reginald Jones says that the Jacob’s Center and projects must reduce its debt which he has brought down to about $18 million since his arrival. This latest reduction in force is the third since his arrival. The Center will go forth with an operational staff of about 45 people and by 2016 will only have an operational budget of about $8 million for everything. “The Jacobs Foundation, which has funded much, if not practically all the people who have worked there is not without limits and must make cuts as others are in accordance with a changing economy,” shared Jones.
Questions were raised about the termination of what appeared to be the entire security staff and the fact that it appeared that local security firms in the community were not given an opportunity to bid the job or participate in the hiring. Not so says Mr. Jones. As a part of the restructuring underway, the mall or “Market Creek Plaza” was out sourced in January as a first step in placing the facility with a property management firm to handle the operations of the mall. The turning over of the security services was phase two of the process and under a Community Benefit Agreement (CBA). Of the 22 security personnel terminated, Mr. Jones states all but 4 have been rehired by the new firm and more hires are to come.
Mr. Jones stressed his obligation to the 415 investors in the Jacobs Center. He said there have been years when expenses exceeded revenue as Jacobs functioned as an employer rather than as a jobs creator. The time has come when revenues must support the work force. He must put the organization in a sound fiscal position so that expenses do not exceed revenues. For example when programs like Coming Home to Stay ran out of funds over a year ago, Jacobs continued to provide funds. It can no longer do that since the funds are not there. It is hoped in the future that Jacobs can partner with those who are funded with like interest. There are a number of questions being raised. Mr. Jones says that it is his goal as president to operate with “transparency” and to that end, the Jacob’s Center for Neighborhood Innovation is purchasing a page in this issue to present its story separate and apart form this article.
There are a number of very unhappy people among those who were terminated. Some had been with Jacobs for many years and there was a feeling that there could have been more notice and efforts to help people find other jobs. Some feel that if they apply for some of the new positions being created with the same people doing the new hires as the ones that fired them, that there will be very little chance of a fair interview or consideration. Mr. Jones says this will not be the case, and that only the best and most qualified will be selected. Time will answer most of our remaining questions. Meanwhile, Walgreen’s is scheduled to start hiring and construction this month on its new store, which is on property controlled by Jacobs.

Owner of gay club: Shooting comes amid a new ‘type of hate’