Home National The Presence of Protest Around San Diego 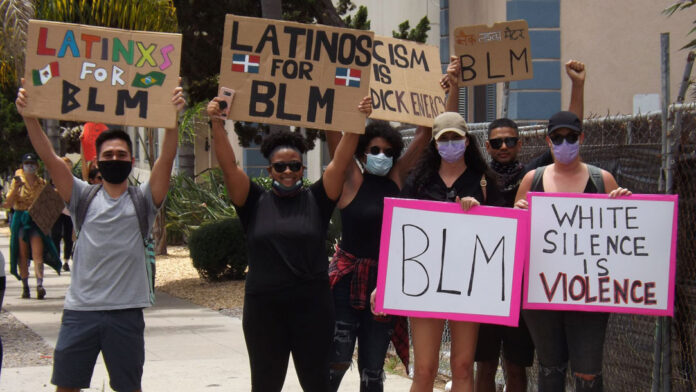 It was May 25th, Memorial Day 2020, when the heart of George Floyd stopped beating at the hands of the Minneapolis Police Department. In this case, it was a knee to the neck of Mr. Floyd that led to his death. What followed was a worldwide demonstration of solidarity against police brutality. Here in San Diego, the protests were no different from downtown to Santee and parts in between.

The visuals of protest are all around us. National Guardsmen were stationed at San Diego’s Hall Of Justice and the Superior Court Building downtown and they also stood watch at the La Mesa Police Department.

There were Latino activists marching for (BLM) Black Lives Matter in the Balboa Park area where they joined a couple of thousand multiracial people peacefully walking north toward University Ave.

Artists also had their hands in the mix downtown as well, by lending their talent to Paint The Town With Love. It was a collaboration between artists and volunteers to paint happiness on the boarded-up businesses in the area. Not to be left out, demonstrators in Santee showed up more than a thousand strong to walk in unity to make a statement and a difference in police policy concerning black lives in our nation. Their efforts and presence were greatly felt, seen, and heard all around San Diego.