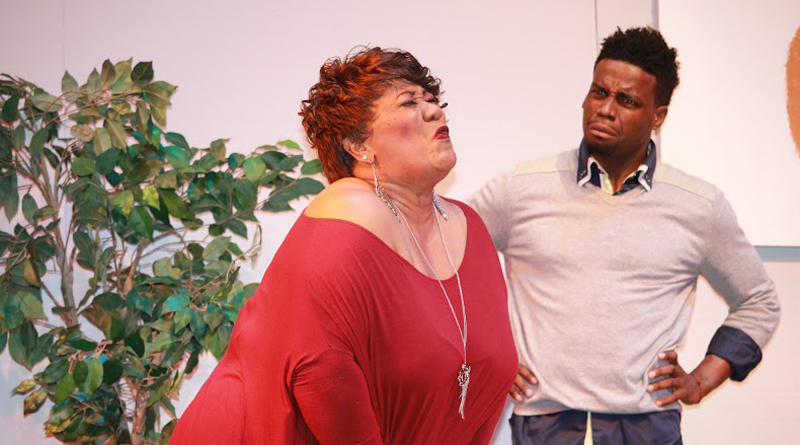 On Saturday, February 13th at the Lyceum Theatre, Tamera Hill debuted her latest stage play ‘The SoulmateExperiment’ to a sold out audience. The production was a part of Kuumba Fest, San Diego’s longest running celebration of African American expression, culture and heritage.

The evening opened with a soulful performance by Mrs. Hill’s production touched on classic themes of love, secrecy and redemption. Vincent (Wrekless Watson) and Tammy (Chida Warren-Darby) meet-cute at their friend’s Angie (Ashley Taylor) and Terry’s (Antonio Williams) wedding anniversary. Their connection is deep and the two lovebirds decide to forgo stereotypical pleasantries of contemporary relationships and get engaged right away. Shenanigans then ensue.

The players delivered a wide range of emotions for the audience to consume. Laughter was a constant during the performance. Standout performances included Beverly Taylor-Winters portrayal of Vincent’s overprotective and dramatic mother Louise. Ms. Warren-Darby also shined emoting Tammy’s dark past with sincerity. Audience member Tiffany Tharpe enjoyed the roller coaster of humor and tear jerk moments.   “I loved the fact they were able to bring something with substance to San Diego. The creativity was there and it touched people on so many levels. You could hear it throughout the crowd.”

Pastor Terrell Fletcher, who is proud to have Mrs. Hill as a member of his church, was in attendance for the entertaining evening and claims this was his favorite of the plays he’s seen her produce.

“It’s always going to have a redemptive deal that’s going to leave us encouraged at the end. The whole idea of the soul mate, I think is critical, important and possible for your soul to be knit with somebody right away and move on it.”

While the production had its share of racy moments of love and passion, in large part to Mr. Watson’s physique, there were strong spiritual themes of faith and forgiveness embedded in the script. Raquel Harriot appreciated the deeper message of the performance.

“It provided a lot of good insight about relationships and marriage and really keeping God first. I like that it was the over line theme of the pay because that was really important.”

The beautiful thing about attending plays is the actors on stage are able to connect with the audience on an intimate level and the energy flows through the entire room. ‘The Soul Mate Experiment’ succeeded in its attempt to entertain and inspire at the same time.