Home National The Spirit of Warning 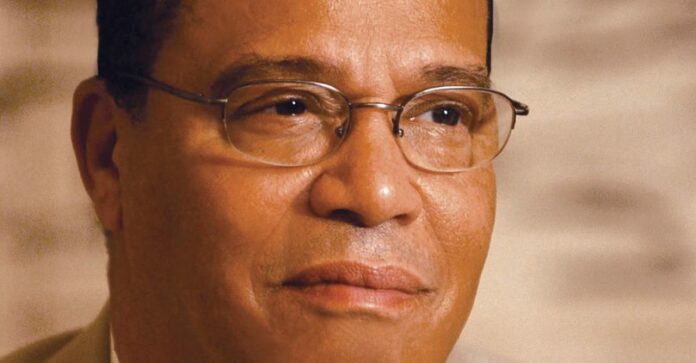 “And it is only when men and nations see the interconnected relationship of nations; and understand that any nation that is oppressed or deprived means that the family of nations will ultimately feel the pain of that one unless the deprivation and the oppression of that nation, or those nations, are addressed by those who feel they are in a better position that universalism can be attained.”

By the Honorable Minister Louis Farrakhan

I have dedicated my life to truth and to the service of a suffering Black people in the United States of America, and oppressed people all over the world. However, I have never been censured for my good works.

I have been accused of being an “Anti-Semite.” I am not that, and it would be disgusting for me to waste the valuable time of distinguished men and women to ﬁll their ears with that which could be considered against the Semitic people of the Earth.

I am not a racist, though I have been called these things. I am not against people, of whatever nation they belong, seeking advantage for their nation in the name of “nationalism.”

And it is only when men and nations see the interconnected relationship of nations; and understand that any nation that is oppressed or deprived means that the family of nations will ultimately feel the pain of that one unless the deprivation and the oppression of that nation, or those nations, are addressed by those who feel they are in a better position that universalism can be attained.

I am not against the colors [of people], that God has allowed to exist, seeking advantage for their color. But what we stand against is when a nation will deprive another nation of liberty and justice and the pursuit of happiness to rob that nation to enrich itself. That is not “nationalism.”

When one color will exploit another for its own aggrandizement to the detriment and deprivation of another, that is not “lifting up one’s race,” that is outright wickedness. And all men and women of conscience; all men and women who love justice and truth must condemn wickedness wherever we ﬁnd it.

It is because America, the nations of the Earth and Black people are offending The God of Time, and, The True Path that men and nations should be on.

Black people are offending God because the time of our servitude to White America is up, and we must begin to make independent steps. We cannot, as a people, continue to depend on others to feed, clothe and shelter us, and yet desire to be treated as an equal. We must become a productive nation. And if we do not become productive, then we offend God, and we offend The Time, and we offend ourselves, and we offend our unborn generations. Therefore, we must be warned to get up from the foot of America and get up from this groveling, servitude position and exert our energies; to assert ourselves as free men and women.

America must be warned because America has done injustice by Black people, by the Native Americans, by poor people, and by other nations of the Earth. If America does not change her course of action, America will go the way of her sister nations: Ancient Egypt, Sodom and Gomorrah, Ancient Rome and Ancient Babylon.

The nations of the Earth must be warned because many of the nations are in league with injustice. And so, my honor and blessing and privilege of being here is in The Spirit of Warning.

The nations of the Earth are gathered together in this United Nations building because of war; and a desire among the nations, after witnessing and participating in the slaughter of human life in World War I and in World War II, that the nations may study war no more.

Downstairs it is written that the nations should “beat their swords into plowshares,” and, the nations should “study war no more.” They should “not lift up sword against nation,” neither should they “learn war anymore.” That’s a wonderful inscription from Isaiah the Prophet (Book of Isaiah, Chapter 2, verse 4):

“And he shall judge among the nations and shall rebuke many people: and they shall beat their swords into plowshares, and their spears into pruninghooks: nation shall not lift up sword against nation, neither shall they learn war any-more.”

But when will that happen? Since the Prophet wrote it, and gave it a Future Tense, the question is: When will it happen?

The nations are gathered here to prevent another global conﬂict. But it appears that the nations are quickening their pace toward World War III, which is called in the scriptures of the Bible: Armageddon.

Since the United Nations is not a war-making body, then the only way it can attempt to bring about justice is through sanctions; and through the strength of moral persuasion inﬂuencing world opinion.

However, if a veto from one of the Five Permanent Members of the Security Council can stop sanctions, then this United Nations body is not set up by the Founding Fathers of this institution to truly bring peace about.

And therefore, the United Nations cannot be looked upon as the true hope of those who sincerely seek peace and justice.

Now, I don’t want you to think that I am disrespecting the efforts of this great institution. But all I’m saying to you is we cannot look to this body to bring peace when it never was constructed by its Founding Fathers to bring that about.

According to the teachings of the prophets, the scriptures of the Bible refer to the powers that govern this world, in both the Book of Daniel and the Book of Revelation, under the symbol of Four Great Beasts.

A beast does what it has the appetite to do, and the power to do.

Beasts are not moved by moral persuasion.

If such exist here in the United Nations, what will change such deafness and such dumbness, since a vile beast cannot be morally persuaded?

If we are going to beat our swords into plowshares and our arrows and spears into pruning hooks, then who will listen? And what power will force the nations to do this?

The winds of revolution and war are blowing from all parts of the Earth because the governments of the nations are not in harmony with the will of the people. The policies of the governments of the world are not good policies; and therefore, Jesus prophesied: “Wars and rumors of wars. Kingdom against kingdom, and nation against nation,” and these prophecies are correct according to the actions of the representatives and the nations that are represented in this building. …All of the nations are subverting the desire for peace, the cultivation of their people, and the production of the land for the sustenance of the people, to the bind of Weapons of War.

Poor nations are selling out the future of their people, going into huge debt with the superpowers and the banking institutions of the world, for the purpose of more and more sophisticated weapons. While the little people who hunger for peace are hungry, naked and out-of-doors, governments are purchasing armament at the expense of the peoples’ desire for peace and justice.

Why should we call for peace if we know it is not in the hearts of the nations to bring it about? And, if I would stand here and call for it as though I really expected it, I would be negating what the prophets had written, and I would be making God out to be a liar.

The interference by the superpowers in the affairs of small nations is hastening The Day of All-Out War.

The injustice done to the Palestinians in the taking of their land by force and by deceit; and the weakness of other nations—particularly Western nations—to take a stand for what is just and right in the Middle East is hastening The Day of All-Out War.

Exploitation, colonialism and racism that is being practiced by nation against nation, and people against people, is hastening The Day of All-Out War.

The work of the rich against the poor; the strong against the weak; color against color; religion against religion; and sex against sex is hastening The Day of All-Out War.

But there is a way out.

The Honorable Elijah Muhammad said to us that neither justice nor peace shall come to the nations of the Earth until the 400-year-old Problem of Black People in America has been solved with Justice.

And the reason why no other nation can have justice or peace until the Problem of Black People in America is properly solved is because God Himself is Championing Our Cause for Justice.

America, I repeat, can have no peace, nor joy in liberty—and the deprived nations can have no justice—until the Black Man’s Problem is Solved, as the nations are tied to America in such a way that her problems make problems for the nations of the Earth.

So, what truly helps America will help the nations.