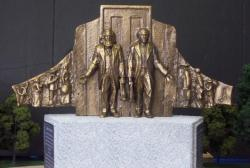 The Huntoon-Van Rensalier Underground Railroad Foundation in Paterson, New Jersey has been keeping its goal of inspiring racial cooperation through the saga of the heroic journey from slavery to freedom. In keeping with this goal, a Memorial honoring Patterson’s two abolitionists, Josiah Huntoon (white) and William Van Rensalier (black) is being designed and built by distinguished national black architect, Ed Dwight. It will include a large Monument depicting both abolitionists with fugitive slaves moving toward both of them. It will also include a commemorative Legacy Path embedded with donated personalized bricks from across the nation. The Memorial unveiling will take place on June 18, 2014, a special historic Juneteenth celebration in Paterson, New Jersey.

Before 1996, if you passed by the neglected vacant lot on the corner of Broadway and Bridge Street in Downtown Paterson, you may not have even noticed it. But in 1996, it became a hard-won official preservation as the Huntoon-Van Rensalier historic Underground Railroad Site. If you look with your heart’s eye, you may almost see shimmers of the historic safe-house and spice mill where Josiah Huntoon and William Van Rensalier risked their lives to shelter fugitive slaves there before and during the Civil War.

Each generation the older Paterson community has loyally passed this heroic history. For one of the dramatic details, we reach back to the late 1960s when the city’s Mayor Kramer published and proudly circulated the pamphlet, “Did You Know.” It was yet another tribute honoring the city and site’s history. It reads:

“Paterson was a stopover during the Civil War…Peering down from Garret Mountain [the hill] towards Paterson, a lookout would focus his attention on a small factory on Broadway.
When the way was clear for the escaping slaves and their guides to enter the city, a lantern was placed in the [safe-house] tower. When the light was seen by the men on the mountain, the group entered the city and hid the slaves in rooms in the basement of the buildings until the following night…one of the more traveled routes was from New Brunswick through Paterson to New York City, then Syracuse and finally Canada.”

The city had more than one safe-house that hid fugitive slaves on their way to Canada and freedom, but “Huntoon’s Corner” is the only documented Paterson site. Josiah Huntoon was a white, self-made wealthy spice merchant by 1855, and well known as an “avid” abolitionist. During the mid-1850s until the end of the Civil War, he and his engineer, William Van Rensalier, who worked and lived with Huntoon, together risked their lives at their downtown home and spice mill hiding fugitive slaves. Both abolitionists remained close friends until the end of their lives. Exemplary of the power of racial cooperation, they and the nation’s black and white abolitionists together, effectively influenced the end of slavery.

For more information on how you can donate your own personalized Legacy brick by April 15th, please go to www.thatsmybrick.com/HVUGRR, send an email to VanRen@aols.com, or call Dolores Van Rensalier at 619-632-3055.