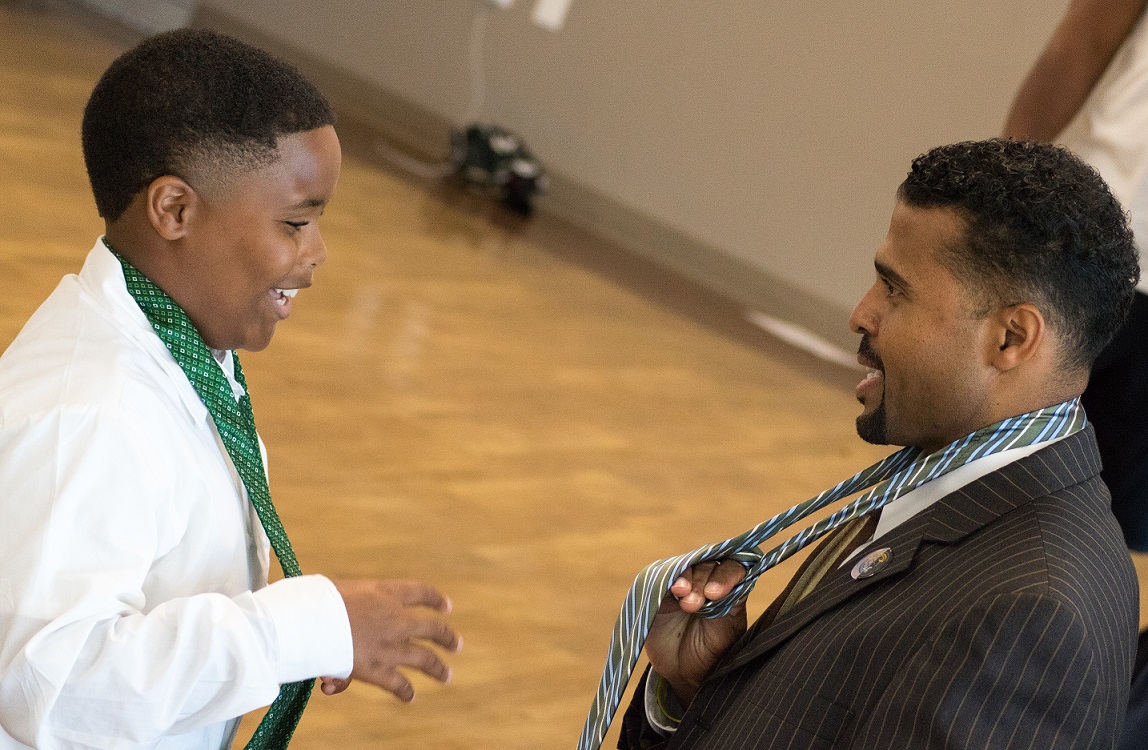 Early on Saturday, June 24th, young men in slacks and button up shirts began to trickle in to a large conference room on University Avenue in City Heights for the third annual “Brothas with Ties” event.  By all accounts, this year’s event was another success, with a large turnout of over 50 men in attendance, with the intent to mentor or be mentored in the value of dressing for success and being prepared for life after high school.

The event is named “Brothas with Ties” because the goal is to introduce elementary, junior high and high school aged boys to professional men of color from a wide variety of professional backgrounds. In addition, each young man would receive a neck tie and learn to properly tie his tie with his mentor for the morning.

To kick off the mornings interactive workshops, Taryell Simmons, Training Specialist with San Diego Workforce Partnership conducted a presentation and role-playing exercises teaching the young men interview preparation skills, the value of dressing for success, teaching them about professionalism and stressing core values, most importantly being who you are and maximizing your natural skills.  Simmons was invited to participate in “Brothas with Ties” last year by friend and “Brothas with Ties” creator Matthew Gordon. When asked what brought him back for a second year to participate, Simmons said, “I want to help young men see a variety of professions,”. Through programs like “Brothas with Ties”, and the work he does at San Diego Workforce Partnership, he wants young men of color to be exposed to a wide range of career fields in San Diego, particularly those with companies north of the 8 freeway. “How will they know about engineering jobs with Qualcomm if they are never exposed to them?” Simmons got the young men up and relating with the mentors by having them introduce themselves, and having the mentors ask the young men a series of questions that they might be faced with in an interview.  He stressed key, communications skills for each young man to exercise during the mock interviews, such as having a firm handshake, making eye contact and engaging your interviewer with follow-up questions.

Jordan Harrison, Chief Inspiration Officer and Director of College Town with Reality Changers was the second dynamic presenter of the morning.  Harrison shared a bit of his back story, inducing hysterical laughs from the young audience when he showed pictures of himself in high school and shared the struggles of trying to impress his female classmates, while toting a roller bag to class. Harrison, who will begin his pursuit of a Master’s Degree in Education at Harvard University in the fall, engaged the young men and their mentors for the day with several actives. However, the activity that most concisely embodied the sentiment of the day was the “With A Tie” affirmation.  Harrison had the young men stand in a large circle, with the mentors near the edges, representing their community and the unbreakable bond that they have.  Harrison would push one young man to the center of the circle, the young man would exclaim his professional aspiration, “I am a congressman!” or “I am archeologist!” and the group would respond, “With A Tie!” Expressing that not only was the young man a professional in the making, but a professional with a tie, connection and support of his community.  When asked why he chose to come back and participate with “Brothas with Ties” each year it has existed, Harrison said, “I identify with what this means and I want to be in the presence of these young men.” “This program is a great idea, but our community needs to connect beyond one morning of activities.  Take a young person to coffee or call once a month.” He expressed that programs like this are important but the true value lies in making deeper, lasting connections in the lives of our young people.

After a brief break, at which point the young men could select a tie from a table overflowing with every color and pattern of tie, donated by individuals as well as ZB Savoy Ties on Broadway in Downtown San Diego, the young men socialized with one another and their mentors as they practiced trying to tie their ties.

As the young men found their way back to their seats, the panel discussion began. Young Professional, Aerospace Engineer and Mentor, Jenale Scarlett was the moderator of the panel discussion on the realities of college.  Panelists Jeffrey McKennie, Mesa College graduate on his way to study Black Studies and Psychology at SDSU and Thomas Hintza, African American Brotherhood leader at SDSU shared specific instances in their college experience and some of the wisdom they have gained along the way.  McKennie, who after graduating from SDSU aspires to attend Howard University to study Marriage and Relationship Counseling shared a valuable insight, “Take your college years to transition into the successful person you want to be”. The young men had several questions for the panelist, spanning a wide variety of topics including balancing class load with work and social life to how do you navigate transportation issues in a city you may not be familiar with.

During the final break, Raquelle Taylor and Kayshawn ‘Kay’ Perry, mothers of young men participating shared some thoughts about why they felt it was important to bring their sons to this event.  “Being a single mom, I see the value in brining my son to learn something that I can’t teach him,” said Taylor, “I don’t even know where to start when it comes to teaching my son how to tie a tie.” Perry, brought her son for inspiration and exposure to see men doing more than rapping and playing sports.  Perry said that she wanted her son to have a wider horizon and she was thankful that people such as the mentors and the Young Professionals would care enough to organize an event like “Brothas with Ties”.

The final activity of the day was the tie challenge.  In this challenge, each young man would have to try to tie his tie correctly in the shortest amount of time.  Those with the least amount of time taken and the best-looking ties would face of in the circle of their peers and mentors.  Kaori Anderson Walker, 17 was the winner, successfully tying his tie in 30 seconds and winning Geoffrey Beene watch and matching pen.  Anderson Walker was delighted to win, not just for the gift but primarily for bragging rights amongst his friends.

San Diego Urban League Chief Executive Officer, Ray King was on hand to participate as a mentor and to show support for the Young Professionals who successfully put on the event. “I am so impressed with the volunteers and how they convey warmth and share their experiences with the younger generations.” said King. “I’m impressed that these young kids are asking the right questions and are engaged.” King shared his elation with how smoothly the program ran and was adamant in his desire for the community to be aware of this event and the kind of exposure it provides to something that’s not easy to do, like tying a tie. “Yet the Young Professionals have found a way to make it fun and engaging and the symbolism in the ties to the community is fantastic!” King continued, “I hope the community will see the value in supporting not just the young participants in this workshop but the young adults who help put it on.” King went on to state, “Who better than the Young Professionals to put on this event, in showing their committed to making life for Black American’s better?”

If you would like more information about donating a tie “Brothas with Ties”, participating in next year’s event as a mentor or bringing a young man in to be mentored, please contact the San Diego Urban League Young Professionals at ulsdcyp.advisor@gmail.com.