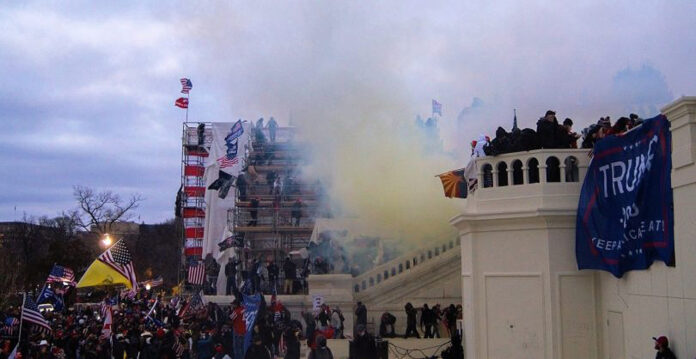 Sedition and conspiracy are among the most severe charges federal prosecutors said they were looking into in the aftermath of the domestic terrorist attack on the U.S. Capitol on Jan. 6.

On Tuesday, U.S. Attorney Michael Sherwin said while some misdemeanor charges are only acting as placeholders until more information is gathered, some involved in the insurrection – directly or indirectly – may well face severe counts of sedition and conspiracy.

According to Findlaw.com, sedition is defined as an act of revolt or violence against a lawful authority to destroy or overthrow it.

A conviction on sedition charges can result in a 20-year prison sentence.

The general conspiracy statute provides a maximum punishment of up to five years in prison and a $250,000 fine.

“We are resolutely committed to upholding the freedoms guaranteed by the First Amendment, including speech, peaceful assembly, and press, and we will investigate, prosecute, and hold accountable anyone who attempts to obstruct or curtail these freedoms through violence or intimidation,” Sherwin pronounced.

The prosecutor said the Department of Justice had created a specialized task force that “will look at everything from travel to movement” of the individuals involved.
“The range of criminal conduct is unmatched,” he declared.

The FBI has warned government officials of plans for armed protests at most state Capitols and Washington, D.C., leading up to the inauguration.

Authorities also released photos of a suspect wanted in connection to the death of U.S. Capitol Police officer Brian Sicknick.

At the same time, Gen. Mark Milley, the chairman of the Joint Chiefs of Staff, said preparation is underway for an unprecedented military presence during the Jan. 21 inauguration of President-elect Joe Biden and Vice President-elect Kamala Harris.

Milley said a message had been sent to the entire military force ahead of the inauguration.
The message was intended to remind military personnel of their responsibility to defend the Constitution.

“Homeland Security must adjust its approach to the inauguration in several specific ways,” D.C. Mayor Muriel Bowser wrote in a letter this week to Acting Homeland Security Secretary Chad Wolf.

“There must be a federal force deployment [plan] for all U.S. government property,” Bowser demanded.