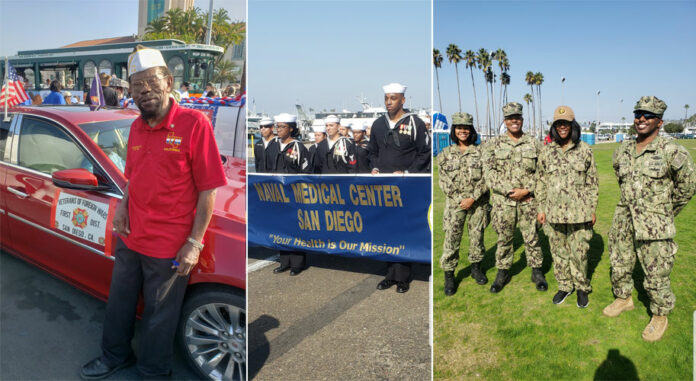 Article and Photos by Brian Goodin

Veterans Day is an American tradition that originated as a way to celebrate the anniversary of the ending of World War I. On November 11, 1919 it was known as Armistice, an agreement made by the opposing forces to stop fighting. It wasn’t until 1926 that Congress passed a resolution to be observed annually by all Americans, officially known as Veterans Day.

November 11, 2019 at 10 a.m. marked the 33rd annual San Diego Veterans Day Parade, which took place on the beautiful waterfront of the San Diego Harbor.The parade began at the County Administration building on the waterfront, spanning a distance of 1 mile heading south on N. Harbor Drive, past a long row of grandstands, past the Star of India, the B Street Pier, the USS Midway, and finally onto Pacific Highway where it turned left to the dismissal area.

This year’s Grand Marshall for the parade was Maj. Gen Angela Salinas, with the U.S. Marine Corps. The Parade featured local Vietnam War veterans and Pearl Harbor survivors, along with current active duty service men and women from all branches of the military. Thousands of spectators were also treated to several drill team performances by local high schoolers from Morse and Mount Miguel, just to name a couple. These performers really showed off their excellent precision during their routines.

Support and participation from local politicians, such as California State Assemblyman Todd Gloria and Lemon Grove’s first African American female Mayor, Racquel Vasquez, who could be seen riding in an orange convertible corvette as she took a moment to express her gratitude for veterans.

Vasquez said “It’s so very important to honor all branches of our armed forces for their sacrifice towards freedom. Without it we wouldn’t have this quality of life that we live in America.”

Art Harris, a United States Navy veteran who lives in San Diego and attended Saturday’s parade, served from 1955-1976 and patrolled rivers on riverboats in Vietnam. He also had a job supplying uniforms to P.O.W’s (prisoners of foreign wars), who were released by opposing forces during the Vietnam War. He said the biggest accomplishments from his service in the military were learning how to work as a team and returning home alive.