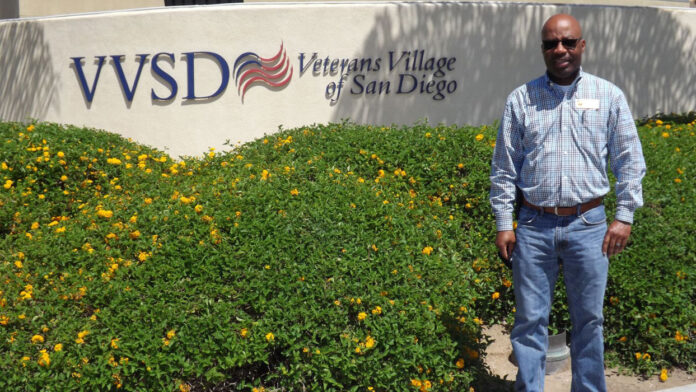 It was 39 years ago that Jack Lyon, Bill Mahedy, Randy Way, Paul Grasso, and Russ Kelly, all Vietnam Veterans, sat around having a discussion on how to better serve the veterans of our nation. What developed was a program that is the only one of its kind and is seen as a go-to model that has gotten national recognition for helping to turn around the trauma and related causes leading to the homelessness of our national heroes.

Veterans Village of San Diego, located in the heart of the city, at 4141 Pacific Hwy is like any one of our well-orchestrated branches of the military equipped to get the job done. In this case, getting the job done requires the healing of many of our former service members. Those efforts are led by Andre Simpson, Executive Vice President, and Chief Operations Officer. He and his staff are compassionate about seeing veterans get all the help they need to live happy productive lives after some challenges that have hampered their quality of living.

Andre, a former United States Air Force service member of 10 years, has worked his way up the ladder. During 24 years of being with VVSD from an employment case manager to his current position, he now has a staff of just under 200 employees. Many of them are veterans themselves. That lends itself to the obvious empathy they have for those they serve in this nurturing environment of healing.

Veterans Village of San Diego has lots of ground to secure when considering the task at hand that many of our former service members face. Situations ranging from Post-traumatic stress disorder (PTSD), Mental illness, Drug, and Alcohol addiction, housing, and employment issues. All these and more are addressed with professional accuracy on the campus of VVSD.

Statistics from Veterans-National Alliance to End Homelessness says that over 40,000 veterans are homeless nationwide. California has over 10,000 homeless veterans alone.

VVSD is doing its part to aid in this crisis. One such effort is the Homeless Court Program (HCP) that meets monthly on the campus in conjunction with the Public Defender and the Prosecutor’s office to resolve legal issues concerning the homeless community. To date, it has helped over 10,000 participants. Not only does VVSD seek to help veterans but their families as well, that’s why they have provided Permanent Supportive Housing for 54 families. 1, 2, and 3 bedrooms with wrap-around supportive services continue to bring those numbers down.

It doesn’t stop there, says Andre Simpson, “My staff and I understand this isn’t a one size fits all solution.” That’s why VVSD is offering every possible resource that the Veterans Administration (VA) and the city of San Diego have for those who risk the ultimate sacrifice for their country. It takes roughly 8 million dollars a year to run all of the programs this nonprofit entity provides to our former service members and some civilians.

The mission is to save lives and that’s what one participant named Darwin who is several months into the rehabilitation program says it has done for him helping to put his life back on course as it once was when he volunteered to serve this great nation in the armed forces. The mission statement is “Leave No One Behind” and since 1981 Veterans Village Of San Diego is doing just that for many a veteran. family members and civilians. They’ve even opened a transitional housing program to help the civilian population when there is room to accommodate, as we know homelessness is a major issue.

Veterans Village is a safe place of peace to reorganize and become the best one can be. It’s somewhat of a full-service community with beautiful surroundings, even a garden to grow fruits, vegetables, and oneself.

I asked Andre how did his days as a case manager lend to what he applies to help so many individuals as the now acting C.O.O of VVSD? He responded, “I have learned to hear people, and not just listen to them. It’s a critical difference when attending to veterans’ needs.” I believe he and the staff of people who work at this outstanding facility really do adhere to the call of duty for so many who gave everything and now need a little hand up. Veterans Village of San Diego deserves a big salute for all that they do in helping to heal our heroes.

Though COVID-19 is at hand, VVSD has managed to work through the pandemic while operating in the confines of State and County requirements, says Andre Simpson. Case management, like a true Marine, has adapted to the rudiment of social distancing to keep everyone as safe as possible in this time of much concern.