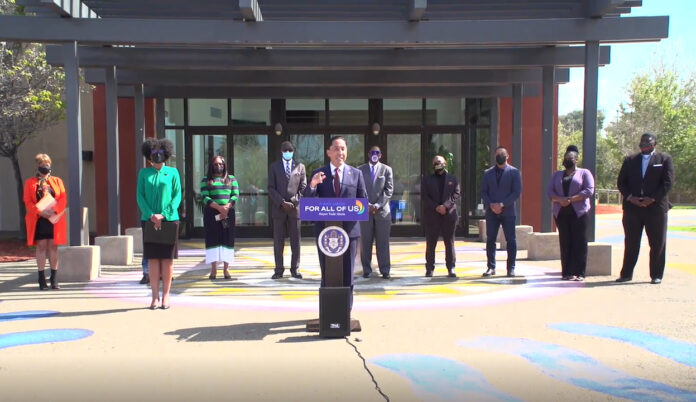 “With the help of my Black Advisory Group and community members, we have developed a framework to tackle some of our Black community’s most pressing issues. This plan will create opportunities for the Black community to thrive today and for generations to come.”  – Mayor Todd Gloria

Mayor Todd Gloria has gone where no other Mayor before him, seriously, has gone in terms of addressing the issue of race and equity in the City of San Diego. He made a commitment to create a more equitable and inclusive city by addressing what he calls “systemic injustices experienced by many San Diegans.” San Diego’s Black community has become the spearhead of this effort. One of his major steps in this direction has been the creation of his Black Advisory Group, drawn from a cross section of the city’s Black community. At his Monday press conference announcing his Empowerment Plan, the Mayor made the following statement:

The Mayor’s Plan highlights six major areas of concentration: (1) It pushes for economic mobility; (2) addresses housing and homelessness; (3) speaks to the need for police reform; (4) addresses the disparate impacts of climate change. This has already started with the creation of the Climate Equity Fund intended to invest in programs impacting underserved communities; and (5) speaks to the need to eliminate educational barriers; and addresses health disparities in the recovery from COVID.

We have seen that he has already implemented an aggressive Housing First Strategy which has included convening an Intergovernmental Roundtable bringing all the players in the region to coordinate and leverage funds to collectively address this problem. The Mayor has said: “Ending homelessness is a moral imperative and is one of my top civic priorities.” The members of the Mayor’s Black Advisory Group had the following comments about the Empowerment Plan: Walter Lam, President & CEO of the Alliance for African Assistance: “We are excited about the Mayor’s plans for our community. I am hopeful it will address and resolve a lot of issues that we are currently dealing with. Francine Maxwell, President of the NAACP San Diego Branch said, “As a native of San Diego this is the first time I have interacted with a mayor who has identified the need to focus some of the City’s resources to address issues specific to African and African-American residents. I appreciate the effort being put forth by Major Gloria on the heels of the recent audit that revealed the inequities in race and gender compensation within several City departments.

No felony charge for man who tackled Dave Chappelle on stage