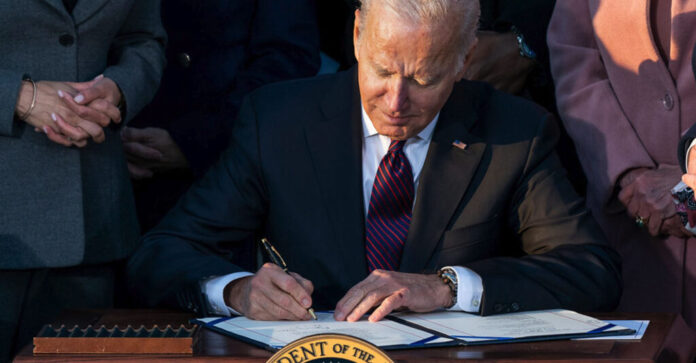 Globally, an estimated 25 million people are subjected to human trafficking and forced labor, which is responsible for an estimated $150 billion annually in illicit profits.

In a fact sheet released by the White House on Friday, December 3, administration officials said human trafficking and forced labor “erodes the safety and health of our communities and transportation networks, the security of our borders, the strength of our economy, and the rule of law.”

They said the Biden-Harris administration is committed to keeping the fight to end human trafficking at the forefront of America’s national security agenda by releasing the new National Action Plan to Combat Human Trafficking.

“Human trafficking disproportionately impacts some of the most vulnerable and underserved members of our society,” the fact sheet noted.

The updated National Action Plan to Combat Human Trafficking responds to this predatory behavior by addressing the needs of underserved individuals, families, and communities.

As such, officials said it reflects the administration’s commitments to gender and racial equity by taking action against the systemic injustices that communities experience, including underserved populations.

“The anti-trafficking efforts outlined in the National Action Plan are directly linked to our broader efforts to address inequities for marginalized groups,” the administration officials stated further.

The fact sheet noted that the National Action Plan also reflects the administration’s commitment to workers’ rights and ending forced labor in global supply chains, which the COVID-19 pandemic has exacerbated due, in part, to job insecurity, supply chain disruptions, and exponential demand for essential medical supplies and services.

The National Action Plan also serves as an important component of advancing the administration’s priority of ensuring safe, orderly, and humane migration.

“As we continue to address the acute and long-term drivers of irregular migration, we must ensure our legal immigration pathways provide safe alternatives,” the White House stated.

“We must also reaffirm trust in the U.S. government’s commitment to protect individuals who have experienced human trafficking, including noncitizens.”

It contains strategic prevention programs which are wide-ranging, from educating vulnerable populations and mitigating risk factors to seeking to prevent goods produced with forced labor from entering U.S. markets.

It also serves to accomplish the following:

Further, the plans protection encompasses the interventions, services, and supports needed to protect and assist victims of human trafficking.

Finally, the White House said effectively combating human trafficking requires collaboration to complement and support the other pillars of prevention, protection, and prosecution.
In doing so, they would also accomplish the following:

“Human trafficking is an evil practice that contradicts who we are as Americans and the rights we cherish. With this National Action Plan, we reaffirm our commitment to preventing and punishing human trafficking in all its forms and to addressing the social and economic conditions that can create greater vulnerabilities for marginalized groups,” said Assistant to the President and Homeland Security Advisor Dr. Liz Sherwood-Randall.

“We recognize and express our gratitude to the community leaders, service providers, businesses, grassroots activists, and individuals with lived experience of human trafficking across the United States and around the world who continue to forge innovative anti-trafficking strategies and push various forms of government to improve their response to human trafficking.

“This includes addressing the ways in which policies and actions may have contributed to disparities that marginalize certain communities, jeopardized safe, orderly, and humane migration, or emboldened traffickers.

“This administration will continue to partner with a growing cadre of interagency, civil society, and international partners – to include those who have experienced human trafficking – to improve our collective efforts to comprehensively address human trafficking.”