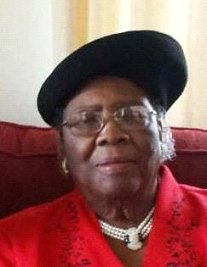 Funeral services were held on November 18, 2021 at Bethel AME with the burial following at Mt. Hope Cemetery. Final arrangements were entrusted to Anderson Ragsdale Mortuary.

Willie Pearl Clayton was born February 16, 1925 in Clayton, Alabama to Will and Irene Clayton. She was the oldest of four children. She accepted Christ at an early age and was a member of Jones Chapel AME Church in Clayton, AL. She served on the Missionary Society, worked with the Sunday School Department and was the pianist for the Senior Choir.

During the summer of 1945, she attended State Teacher’s College in Montgomery, AL., in 1956 Willie Pearl moved to San Diego, CA where she united with Logan Temple AME Zion Church. The following year she became a member of Bethel AME Church. She excitedly dedicated her time working setting up tables and decorating the Fellowship Hall for activities.

Willie Pearl worked at Quintard Hospital until it closed. In 1960 she worked for Doctor’s Hospital of San Diego; CA. now re-named Sharp Cabrillo. She continued to work there until she retired in 1985.

Willie Pearl was preceded in death by her father, Will Clayton and mother Irene Williams, sister Jannie Mary and brothers; James Calvin and Roy Lee Clayton.