Home State and Local Women of Color Protest at Governor Newsom’s Offices to Urge Appointment of... 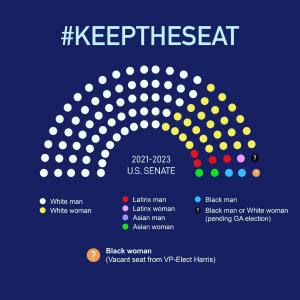 “Black women play a critical role in everything I do and say, and I would love to see a Black woman replace our Vice President-elect Kamala Harris,” said U.S. Rep. Jim Clyburn, D-South Carolina, the majority whip of the U.S. House of Representatives and highest-ranking African American in Congress. “U.S. Congresswoman Barbara Lee (D-Calif. 13), and U.S. Congresswoman Karen Bass (D-Calif. 37) are both qualified and prepared to be California’s next junior senator.”

“Black women in the Democratic Party have saved this country over and over again,” said Molly Watson, Board Member, Black Women’s Democratic Club. “If a Black woman is not appointed, our country loses the Black woman’s voice in the U.S. Senate.”

Historically, Black women are blatantly excluded from leadership roles. Kamala Harris, the only Black woman in the U.S. Senate, changed the game for us and proved that a Black woman is invaluable to the progression of California and our Nation. Let’s not forget that Black women voted in record numbers to deliver a victory to Democrats and our country. “Karen Bass and Barbara Lee can fill those shoes perfectly without breaking their stride,” said Alfre Woodard Spencer, an actress and activist.

“Like a modern-day Harriet Tubman, Vice President-Elect Kamala Harris kicked opened the door to claim a seat at the U.S. Senate table,” said Marie Y. Lemelle, MBA, former State Board Member for Barbering and Cosmetology and City of Glendale Commission on the Status of Women. “Harris’ legacy is to lead more Black women to the table who will represent a forgotten but strong California population.” It is no surprise that women are already underrepresented in the U.S. Senate; and that is unacceptable. California should continue to buck the trend and send another Black woman to the U.S. Senate.

December 1st marked the 65th anniversary of Rosa Parks’ refusal to give up her seat. Her right to keep her seat was a symbol of will power and the right to claim a prominent place in this world. We are ready to repeat the historic and courageous move that Ms. Parks made to demand respect and inclusion. She stood her ground without a coalition of Black women by her side. We earned the right to #KeeptheSeat and will continue to fight to never give up our seat to represent all people but especially the largest population in the State of California.

We live the values of gender equality, fairness, community, diversity, and authenticity that are essential to strong leadership. We ask that you do not overlook our progressive leaders Bass and Lee to carry the torch lit by Kamala Harris. Don’t dim the light of the Black woman’s spotlight and voice.

There is no doubt that Bass and Lee are ready to take on the challenges and issues that face Californians. They have the experience and the relationships to step in Kamala Harris’ shoes and step up to the table with confidence and determination. They know how to get the work done in Congress while advocating for the needs of Californians.

This is our time, and we are staking our claim to the seat that Kamala Harris earned with the support of Black women. Diversity in our leaders is the core to who we are in California. Together, we benefit from a variety in experiences and perspectives.

Tell Gov. Newsom why we need to #KeepTheSeat and #AppointABlackWoman, write to the Governor’s Chief of Staff Ann O’Leary at ann.oleary@gov.ca.gov.


Unlike many news organizations, Voice & Viewpoint delivers content that matters to you. Help us keep it that way by making a generous donation for as low as $2. Your support will fund local, investigative journalism for the community, by the community.