Held at San Diego State’s Arts and Letters auditorium and hosted by Ms. Chida Warren-Darby, Managing Editor of the Voice and Viewpoint Newspaper, the conference lasted from 8 am until 3 pm on Saturday, April 12, complete with life-changing revelations and lively discussion between guests and the speakers.

“Now those people that you wrote down – and those traits that you so admire in other people – are within you. Those gifts within you – that is who you are,” said Dr. Lisa. The women were impacted immediately by her words as “Wows” could be heard throughout the lecture hall. 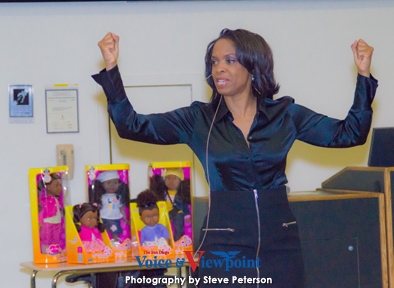 Dr. Lisa Williams is internationally recognized as an academic trailblazer, founder of a multi-million dollar company, and an award winning speaker and author. Through hard work and perseverance Dr. Lisa attained unprecedented success by becoming the first female professor to receive a multi-million dollar endowed chair, the first African American female professor to earn tenure at Penn State University, and the first African American to receive a doctorate in Logistics from the Ohio State University. But after years of teaching, Dr. Lisa embarked on a new endeavor: crafting dolls.

These weren’t just any dolls though. Through her experiences as a professor, she saw African American girls and young women and girls of color suffering from low self-esteem. And she realized that there were no dolls that looked like the women of color she taught. “I took a vision and a passion, and translated it into a doll that would build up a little girl’s self-esteem,” she says.

She founded the World of Entertainment, Publishing and Inspiration (World of EPI), LLC. EPI is the classic Cinderella story. Dr. Lisa grew the company from negative revenues into a multi-million dollar powerhouse. EPI is now a leading multi-cultural toy manufacturing and design firm with a global supply chain that crisscrosses the world from the US to China and other worldwide destinations. Visit her at www.positivelyperfect.com and www.worldofepi.com.

At the conclusion of her session, Dr. Lisa provided every attendee with a doll.

The City of Compton’s Mayor, Mrs. Aja Brown inspired the group of women to see past their current lives, and live to make a difference in their communities and the world around them. And at 32 years old as Compton’s youngest elected mayor, she exemplifies selflessness and humility, coupled with a drive to achieve what many see as unthinkable for Black women. 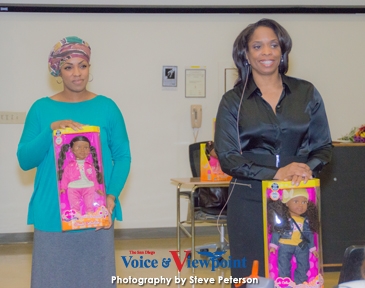 “I didn’t have a lot of support [in running for mayor],” said Mayor Brown. She shared her story of encountering constant obstacles, and attaining success at such a young age through college and the urban planning field – a field dominated by white men. She pressed upon the women that they too can be just as successful, and even said she desires for her contemporaries and successors to be more successful than she.

“I don’t receive ‘I can’t’,” said Mayor Brown. “I am very passionate about issues that impact women, children and families, and so I know that we can make a difference.”

Mayor Brown has achieved a great deal in just 9 short months of being in office. She has changed public policy on a number of issues, elevating the City of Compton to national recognition. Running on a simple platform of making genuine connections with the community, she won the position with an overwhelming 64 percent of the votes.

In bridging the generation gap between seasoned and younger women, Mayor Brown offered, “We have to have an agenda and the goal to be deliberate. Older women have a wealth of wisdom and knowledge and we need those seasoned women to mentor the younger women who are hungry for that knowledge. We must reestablish what community means to us.” 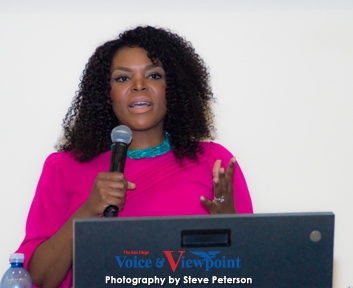 Mayor Brown graciously met with attendees after her session and remained for a photo-op with every woman who desired to photograph with her.

Miss Leah Albright-Byrd completed the sessions, sharing her story of turmoil and devastation through an abusive childhood and domestic violence home, and later being lured into the sex trafficking industry. Now as a survivor, she has achieved so much, working as an international advocate in bringing hope and a future to girls and women around the world.

“My life’s vision is to deal with the issue of change and healing in our women,” said Miss Leah. Referring to herself as a “hope dealer” she took the women back to times in their lives when they dreamed. “Where do our dreams come from?” she asked. “From personal events, from a problem or need,” she answered.

Miss Leah dealt with trauma at a very young age, from witnessing her biological father become addicted to crack-cocaine, to moving to Germany and experiencing racism as a bi-racial child, to moving back to the States and falling victim to the sex trafficking industry. And yet, she was able to find the “good”in those situations. She encouraged the women to do the same.

“Because I was disconnected from everything, I searched for my identity in men,” she said. “But your value comes from who you are, not what you wear.”

“What happens when we pursue our dreams?” Miss Leah then questioned the women. “We encounter obstacles.” 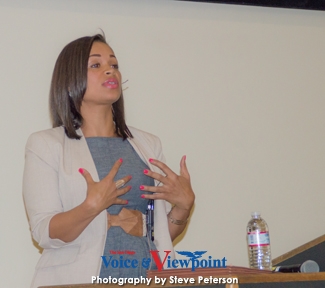 After coming out of the life, Miss Leah eventually earned a B.S. in Psychology and Theology from William Jessup University and received her Coaching certification from Western Seminary. Losing her best friend, Bridget on March 3, 2002 – the same day she gave her life to Christ – inspired her to pursue her dream in launching her nonprofit, Bridget’s Dream, which uses Christ’s love, justice, and proactive compassion, to wage war against sex-trafficking by redeeming victims, supporting their families, abolishing stigma, and engaging at-risk youth through prevention & early intervention. Find out more about Miss Leah and Bridget’s Dream by visiting www.bridgetsdream.org.

The women participants were inspired by Miss Leah’s life – which prompted many questions on forgiveness and healing. “Forgiveness is key, bless those who curse you,” she added. “What we do not acknowledge, we do not heal from.”

Each woman trailblazer inspired insightful dialogue from the audience on self-esteem, mental health among black women, the role of women, dreaming and becoming the women we each were created to be.

Women were inspired, uplifted, energized and motivated to live the lives they have been blessed with, a sentiment shared by conference attendee Nikki Legros,

“I got a little from each speaker,” she said. “The fact that I could see a doll that looks like me with the same hair texture was a beautiful sight to see. I felt like my childhood was complete.” She was equally moved by Mayor Brown’s session. “It’s incredible to see a black woman who has accomplished and achieved so much, and still continuing on.”

Ms. Chida Warren-Darby, creator of the event, was a gracious host, and did an excellent job of running the conference, facilitating intelligent discussion between the speakers and women in the audience, even down to insuring that guests received meals. The Sisters from the Nation of Islam provided lunch for the attendees, and many other community representatives came out to support the relationship-building, collaborative movement.

Said Ms. Warren-Darby of the conference, “I feel full from the messages delivered from the speakers on Saturday. The response was incredibly overwhelming. It was amazing to hear how each speaker shared a common message of dreaming, which gave many a jump start into dreaming again.”

This conference is only the beginning in bringing women together to share, inspire, motivate and lift each other up.