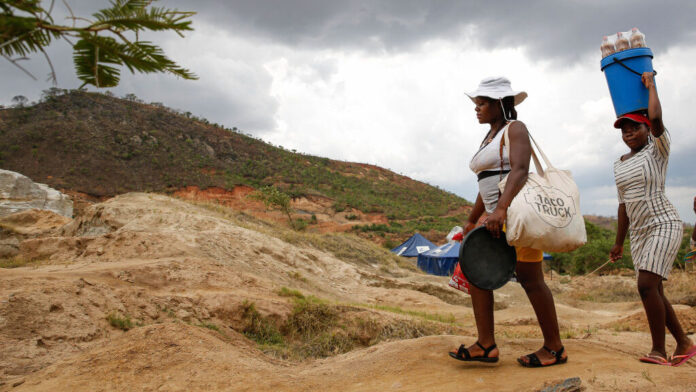 BEITBRIDGE, Zimbabwe — Faced with a deepening economic crisis where runaway inflation and weekly price hikes have long been ordinary, many Zimbabwean women risk their safety and arrest to cross into South Africa by “unofficial” routes — just for necessities like food and clothing.

Beitbridge is the only border crossing post between the two countries on land, and it’s busy even under normal circumstances. But passage has been restricted to essential services, mostly cargo trucks, because of the COVID-19 pandemic. Melody Chengetai braces the murky waters of the crocodile-infested Limpopo River instead. The widowed single mother of four crosses this way into South Africa’s border town of Musina for basics, and then returns.

The official route to Musina is 11 miles, a quick trip by car. The illegal route clocks in at about 15 miles, all on foot.

With prices of basic commodities in Zimbabwe skyrocketing, Chengetai goes regularly. “Things are tough in the country,” Chengetai told Zenger News. “Prices of basic goods are going up on a daily basis. Salaries are being eroded by inflation, leaving me with no option but to convert the few Zimbabwean dollars that I have into South African rand, which I then used to buy groceries.”

Buying cooking oil in South Africa is at least a 50% discount from what Zimbabwean dollars can buy at home. Soap is one-third the price across the border. Salaries, too, are universes apart. The border patrol agents in South Africa might earn $850 per month, according to current exchange rates, but just $10 on the Zimbabwean side.

A dilapidated border fence awaits on the river’s opposite bank, yet another regular hurdle. Women and the men they pay to carry their goods home sometimes wade into the clutches of South African security forces, whom they bribe for a safe passage.

“Getting into Musina is not easy. Security forces are on patrol every hour,” Chengetai said. She described the horrors of one trip when she made it to Musina but was caught on the way home. There wasn’t much to distinguish traffickers operating along the border from South African law enforcement agents, she said.

“I bought my groceries, and with the help of smugglers, we went through another route different from the one that we had used on entry after we were told that it was now barricaded by the police. The new route was taxing, as it was long, with the smugglers demanding extra charges at every turn,” she said.

Moments later,  they were surrounded by 10 police officers brandishing guns, “asking us many questions on why we entered through illegal routes,” Chengetai said. “We were seven women, and eight men who were assisting us carrying our goods. It was a very frightening moment, as one of the men who tried to run away was hit with the back of the gun.

“They threatened to kill us should we try to escape,” Chengetai said, recalling an extended negotiation during a 4-mile march back to a main road, which ended when the price was right. “They demanded sexual favors. It was after we negotiated for 300 rand (US$19.75) that they let us go,” she said.

Thembani Mashudu, a “malaisha,” the word for border men who assist people to cross into South Africa, says women are most often the victims of abuse in the forests.

“There are many hazards within the forests, from robberies, rape and murder,” he said. “Security forces are the major perpetrators of rape, while some criminals who pretend to be traffickers take advantage of women and rape them.”

South African ambassador to Zimbabwe Mphakama Mbete said he was not aware of any abuses. The nation’s Parliament did pass a law this year to tighten border controls.

“I do not know about the abuses, but we are aware that there are places on the border between South Africa and Zimbabwe where people are illegally moving across,” he said. “We are continuously reporting to our authorities. The border management act was approved by our Parliament and there is going to be an institution, the Border Management Authority, which will help with the control and efficiency of our border areas.”

South Africa’s actions run in parallel with U.S. efforts during the administration of Donald Trump to keep Mexican migrants from entering without immigration papers. Trump ran for president in 2016 on the promise to build hundreds of miles of walls along the U.S.-Mexico border.

On the South African side of the Zimbabwean border, plans are underway to erect a 25-mile perimeter fence to hold back undocumented travelers like Chengetai. The current fence has been regularly torn apart by bolt-cutters and shears since 1994 when it was de-electrified.

Zimbabwe’s Home Affairs and Cultural Heritage minister, Kazembe Kazembe, said the government in Harare is taking its own actions.

“We have increased security personnel in known areas,” Kazembe said. “We are in the process of procuring drones to patrol the porous areas. It is also important for citizens to be responsible because at the end of the day we all need each other. We should shun all the illegal places, and citizens should play their part by observing laws.”

But people on both sides of the border know a reboot is coming: $303 million invested in a Mauritius company whose 17-year project will rebuild the crossing, with cargo scanners, modern payment systems, license plate readers and separate lanes for vehicles of all sizes.

For now, however, reality is what it is. An Oct. 2 border reopening was expected to bring some relief to Zimbabwean shoppers, but visitors had to show COVID-19 test results from the previous 72 hours. The tests cost about US$60, far out of reach for people jumping a border fence to afford rice and laundry powder.

Testing laboratories smelling money have set up shop in Beitbridge anyway — at least four since September. They issue 48-hour certificates with every negative result, but no matter the demand, they don’t work through the night. Everything in Beitbridge shuts down at 10:00 p.m. because of a COVID curfew.