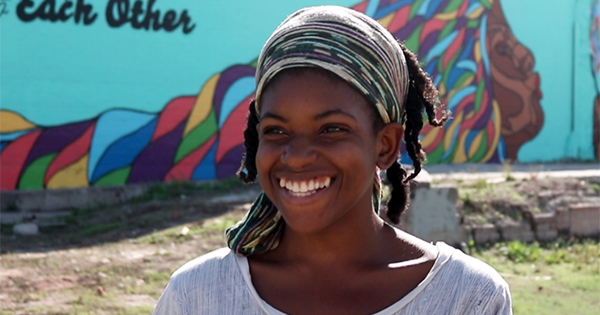 26-year old Olympia Auset, a native of Los Angeles and a graduate of Howard University, grew tired of having to travel 2 hours by bus every time she wanted to buy healthy vegan food. She live in Inglewood, and it quickly became clear that if she wanted better health around her, she would have to do something. So, she created and launched her very own organic grocery store.

There are many organic and vegan grocery stores, but very, very few of them are affordable to low income families and individuals. So Olympia created SÜPRMARKT – a low-cost, organic grocery that pops up weekly to provide 100% organic produce in areas with limited access to food.

Her mission is to make great health and healing within reach of communities that need it the most, and her grocery store’s motto is aptly named “Save Big. Eat Great.”

She comments, “I think the greatest takeaway about this project is it shows there are things every person can do to tackle societal issues that face their community. It isn’t always about waiting on corporations or governments to get things done.”

How she is able to do it

SÜPRMARKT blends new produce with slightly impaired produce to balance out the food waste question in Los Angeles. This means that Olympia has partnered with major organic suppliers in the Los Angeles area to distribute un-sellable food to communities that can make use of it.

The subscription service offers low-cost weekly packages of produce, and EBT is accepted for all food sales. These factors make SÜPRMARKT a viable solution in tackling the questions of food insecurity and food waste, while also building a healthier world.

Since starting in June 2016, Olympia’s grocery store has sold hundreds of cases of organic fruit, veggies, and seeds affordably to low income communities. She has also received grants from The Pollination Project and Co-opportunity, and leveraged the support of food figures such as Robert Egger of LA Kitchen and organizations like The Underground Museum.