By Shannon Van Zandt, The Conversation

How a community recovers after a disaster like Hurricane Ian is often a “chicken and egg” question: Which returns first – businesses or households?

Businesses need employees and customers to be able to function. Households need jobs and the services businesses provide.

As an urban planning researcher who focuses on housing recovery after disasters, I have found in my research that they’re mutually dependent. However, in coastal communities, the recovery of tourism-based businesses like restaurants and hotels depends in large part on the return of affordable housing for employees.

Rockport, Texas, where Hurricane Harvey made landfall in 2017, is an example of the challenge. It’s a small community that caters to vacationers and sport fishermen, including celebrities like country singer George Strait, who filmed an ad campaign in 2018 urging tourists to return to Rockport. Drawing tourists isn’t easy without fully functioning restaurants and hotels, though. In a community review published about the same time, business leaders in Rockport said that the inability of low-wage workers to find housing in the area was a key obstacle to their own recovery.

I’ve been studying housing recovery since 2008, when Hurricane Ike devastated large parts of Galveston, Texas. I’ve found that in many communities, affordable housing returns only very slowly after a disaster, if at all.

Affordable housing tends to be older

The main source of affordable single-family housing in most communities comes from what’s known as “filtering.”

Neighborhoods have a life cycle. As they age, they are either redeveloped or gentrified, or they decline. As a neighborhood declines, homes are more likely to be occupied by renters. They also become more affordable, and they tend to be less well maintained. Apartment buildings that are designed for renters go through a similar life cycle.

In Galveston after Hurricane Ike, we found that the most damaged housing was often in low-income and predominantly minority neighborhoods with older homes.

Much of the workforce housing in these neighborhoods was built slab on grade, meaning the first floor is at ground level and vulnerable to flooding. Most higher-cost homes, in contrast, were elevated anywhere from 3 to 14 feet (about 1 to 4 meters).

Because most affordable housing becomes affordable by becoming old and dilapidated, rebuilding the same size home will also be more expensive than the original, especially amid the current construction market’s supply chain disruptions.

Further, lower-income families are less likely to have adequate insurance or savings that will allow them to rebuild quickly. They often must wait for federal assistance through the Community Development Block Grant Disaster Recovery program, which can take years to reach homeowners.

Our research in both Galveston after Hurricane Ike and in the Miami area after Hurricane Andrew in 1992 found that low-value homes were most likely to suffer extensive damage during flooding. 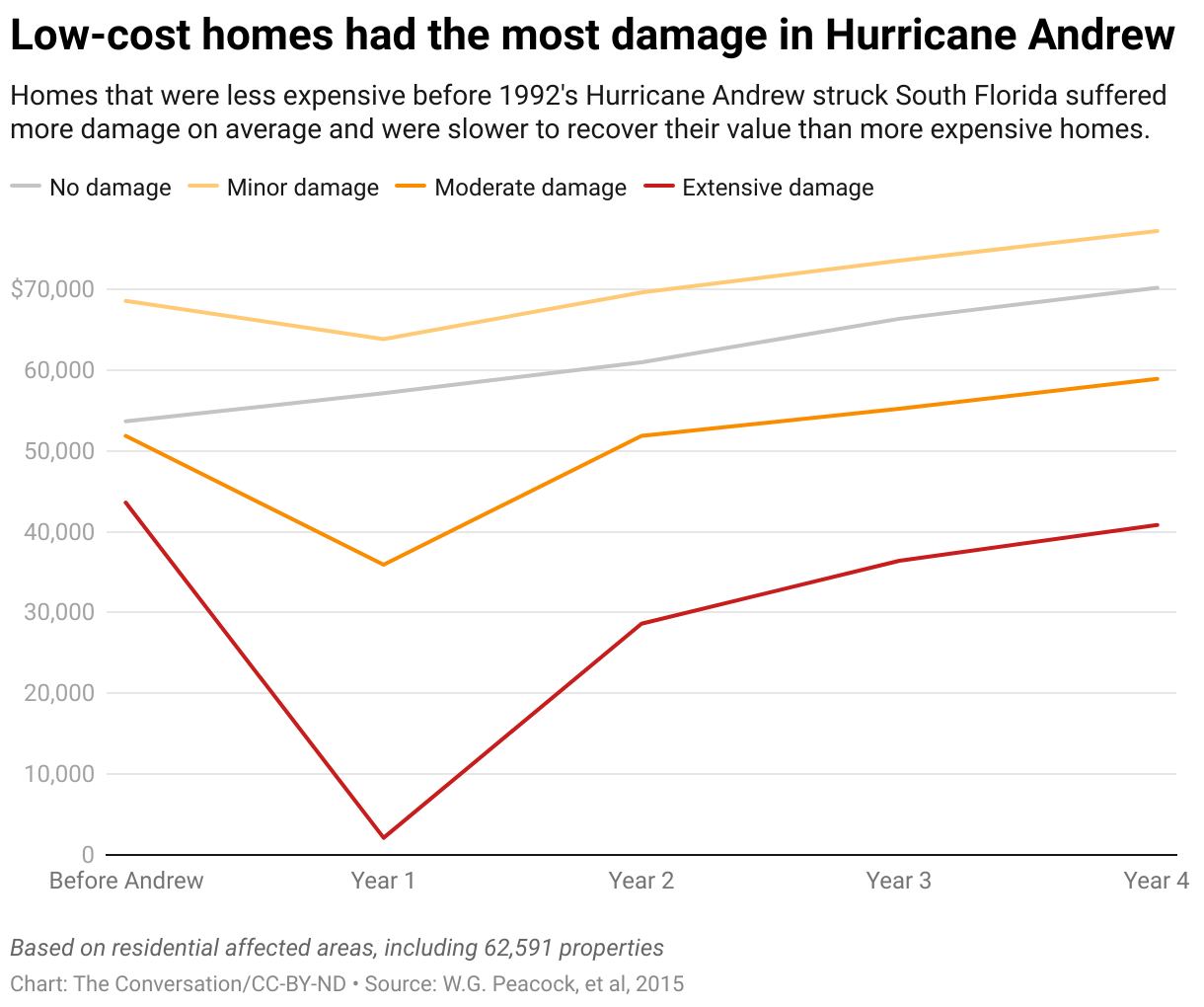 They also take much longer to recover their value, if they recover it at all. In both Galveston and Miami, low-value homes that had extensive damage still had not regained their pre-storm value four years after the hurricane, while higher-value homes sustaining even moderate damage gained value.

Rental housing recovers half as quickly

While renters are difficult to track after hurricanes, we do know that they are more likely to experience long-term displacement.

Our research shows that rental units suffer more damage and recover about half as quickly as owner-occupied housing. 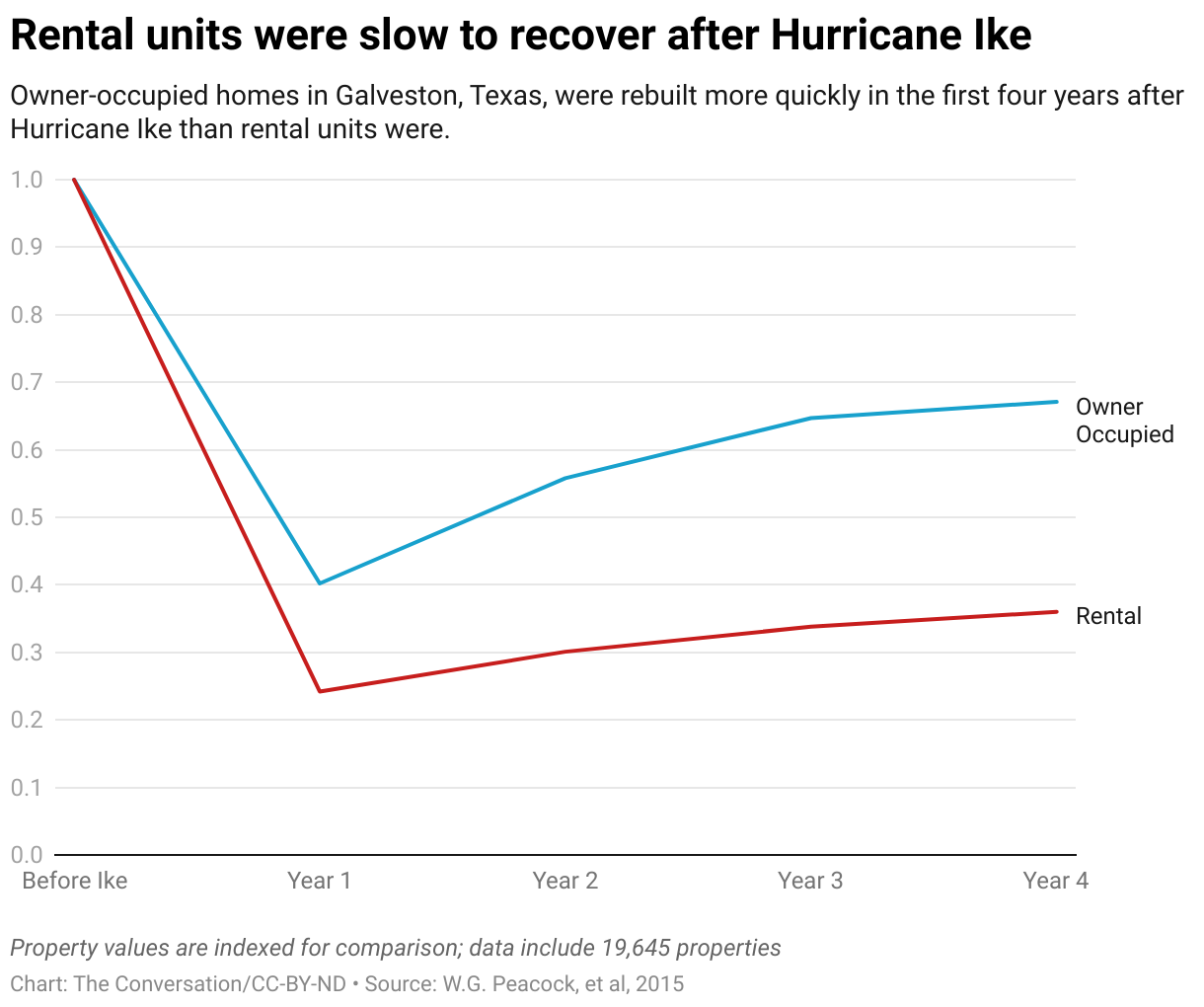 For low-wage workers, the uncertainty of whether they will be able to return to rental units can mean they decide to seek work and housing elsewhere. In talking with residents in Rockport after Hurricane Harvey, I heard repeatedly that workers had moved permanently to San Antonio, 160 miles away, or Corpus Christi, 30 miles away, to find both work and housing after the storm.

In both Galveston and the Miami area, we found that the recovery of apartments and duplexes was much more volatile than single-family housing and took much longer.

Because these housing types are owned by businesses rather than occupants, the decision to rebuild is less urgent and less emotional.

Anecdotally after Harvey, I heard a lot from community organizations in Houston about the speculative purchasing of damaged single-family homes by corporations that flipped them and turned them into rental houses. Investors also talked about the money they could make by buying homes at cut-rate prices after the storm, fixing them up and selling them at a large profit.

What can communities do?

Framing affordable housing as a public good and characterizing it as “workforce housing” for teachers, law enforcement officers, and other public servants can help overcome NIMBY – “not in my backyard” – concerns, but it can still be an uphill battle.

Communities currently recovering will have to be aggressive about ensuring the rebuilding of affordable housing. This means applying for FEMA and Community Development Block Grant funding and thinking creatively about how to bring down the costs of rebuilding.

Another innovative program for rapid recovery of affordable housing is being piloted by the nonprofit Texas Housers. Rather than bringing in FEMA trailers after a disaster, the Rapido program quickly and inexpensively builds the core of a house, similar in size to a mobile home. The core is then designed to be built out later into a larger home once federal funds are available.

Several Florida communities are now dealing with damage to affordable housing after Hurricane Ian. Coastal communities everywhere can learn from what these communities have experienced and prepare now for more extreme storms in the future.