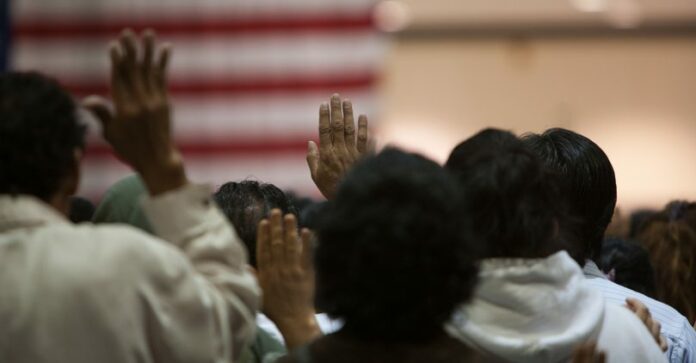 Thomas Hofeller, who passed away in August 2018, concluded in a 2015 report that adding the census question regarding citizenship would produce data on political maps, “advantageous to Republicans and Non-Hispanic Whites.” The information was revealed during a court filing released on May 30.

A deceased Republican strategist who played a key part in the Trump administration’s effort to get a citizenship question included on census forms for the 2020 census has delivered an unexpected message from the grave.

Thomas Hofeller, who passed away in August 2018, concluded in a 2015 report that adding the census question regarding citizenship would produce data on political maps, “advantageous to Republicans and Non-Hispanic Whites.” The information was revealed during a court filing released on May 30.

Hofeller’s documents suggest administration officials were aware that including the question “would not benefit Latino voters, but rather would facilitate significantly reducing their political power,” argue attorneys with the law firm Arnold & Porter, the ACLU and the New York Civil Liberties Union in a letter to U.S. District Judge Jesse Furman.

In 2015, Hofeller also wrote that using census responses to a citizenship question, “can be expected to provoke a high degree of resistance from Democrats and the major minority groups in the nation.”

“The Hofeller memo confirms what we’ve known all along but is alarming nonetheless: the census citizenship question was motivated by blatant right-wing partisanship. The Trump administration has lied to Congress and the U.S. Supreme Court about why it added the citizenship question – voting rights enforcement was but a ruse,” responded Vanita Gupta, President of The Leadership Conference on Civil and Human Rights in a statement.

“Republican political operatives plainly want to deny communities of color the health care, education, and other services they need in order to consolidate GOP power and a whiter electorate. We call on Congress to hold Trump administration officials – including Secretary Ross – accountable now and not to wait until after the Supreme Court ruling to do so. Our coalition continues to stand against the Trump administration’s efforts to weaponize and politicize the census. A fair and accurate 2020 Census should count everyone in this country – and our coalition will do everything we can to ensure that it does,” Gupta continued.

Since arriving in office in January 2017, Donald Trump has made immigration policy a centerpiece of his administration. A primary focus of his policies has centered around a wall at the southern border of Mexico.