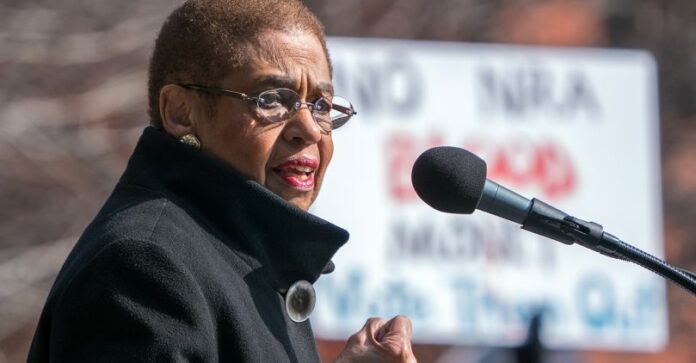 D.C. Democratic Congresswoman Eleanor Holmes Norton told NNPA Newswire on July 26, that each of the 12 federal Appropriations Committees have adopted language from her Government Advertising Equity Accountability Act [HR 2576], which mandates all agencies include in their annual budget request to Congress the amount of money they spend to advertise in minority-owned media outlets.

Beginning later this year when federal agencies submit proposed budgets to one or more of the 12 Appropriations Committees, those requests now must include a line item detailing what they are spending with minority-owned businesses, which include black-, women- and other minority-owned media outlets.

D.C. Democratic Congresswoman Eleanor Holmes Norton told NNPA Newswire on July 26, that each of the 12 federal Appropriations Committees have adopted language from her Government Advertising Equity Accountability Act [HR 2576], which mandates all agencies include in their annual budget request to Congress the amount of money they spend to advertise in minority-owned media outlets.

She said today’s developments mean that her measure doesn’t require further action. “This is exactly what we wanted. This is it, we got it,” Norton said.

“We got all 12 of the Appropriations Committees to include the language and, in October, when the bills take effect, it will be the law and these agencies will have to comply,” she said.

A subsequent 2018 report revealed that, of the approximately $5 billion government agencies spent on advertising contracts, just $50 million went to minority-owned businesses and even considerably less to minority-owned newspaper and media companies owned by African Americans.

“We did this because the federal government is the largest advertiser in the United States and this gives it a special obligation to make sure that it is using advertising dollars fairly and to reach all people in the United States,” said Norton, who has served in the U.S. House since 1991.

At the request of officials from the National Newspaper Publishers Association (Black Press of America) and the National Association of Hispanic Publications, Norton ordered a Government Accountability Office (GAO) examination on the spending on advertising contracts with minority-owned businesses.

Norton began a fight to change that.

She gathered support from other members of Congress and then, in May 2019, she crafted H.R. 2576 and continued to work behind the scenes to find more immediate solutions.

During budget hearings on Capitol Hill, Norton spearheaded a bipartisan effort for the 12 Appropriations Committees to place the language in their spending bills.

President Trump also urged Republicans to pass the budget bills – though, he had not specifically addressed Norton’s measure.

Despite her diligent work, Norton credited minority-owned media with the success of the legislation.

“I didn’t just come up with this out of the blue, I credit Dr. Benjamin F. Chavis, Jr. [president and CEO of the National Newspaper Publishers Association], the Black Press of America, and the National Association of Hispanic Publications because they came to see me about this a couple of years ago,” Norton said.

“They came to Congress to seek redress and I met with them, and then, having heard about what looked like a discrepancy, I needed to see if I could document that. So, I asked for the GAO report,” she said.

Although the legislation does not mandate federal agencies to spend specific dollar amounts with minority-owned media companies, Norton said she believes publishers and owners of those publications ultimately will be pleased.

“Of course, I think they will start advertising because this is a big encouragement to do so,” Norton said. “These are federal agencies under the jurisdiction of the appropriations committees, and they have to come before these committees each year to get their money. When they report back on how many dollars they spent with minority-owned and women-owned publications, they will understand that they will have to do just that and whatever they’ve done before they’ll have to strive to do even better,” Norton said.

“Once again the Black Press of America salutes the effective leadership of Congresswoman Eleanor Holmes Norton,” said Chavis. “Her diligence and commitment to diversity, inclusion and economic equity with respect to the Black Press and other minority-owned media across the United States is noteworthy and much appreciated”