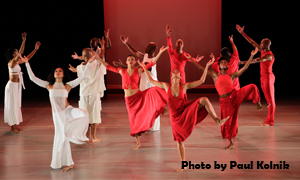 Costa Mesa’s Segerstrom Center for the Arts presents an exclusive Southern California engagement of Alvin Ailey American Dance Theater March 27 – 30. Recognized by the U.S. Congress as a vital American “Cultural Ambassador to the World,” Alvin Ailey American Dance Theater is one of the most creative and inspiring dance companies in the world. Led by Ailey Artistic Director Robert Battle, this sixth visit to the Center by the Company will feature two programs that include three works never before performed on the West Coast by Alvin Ailey American Dance Theater: Chroma, D-Man in the Waters (Part I) and LIFT. Returning are the beloved Grace and Alvin Ailey’s signature American masterpiece, Revelations. Artistic Director Robert Battle is now in his third year with AAADT and is applauded by audiences and critics for his exciting vision, which is extending Alvin Ailey’s pioneering legacy into the future.

To welcome the return of the Alvin Ailey American Dance Theater, the Center and the Company will host Revelations Celebration, a free kick-off event on the Arts Plaza beginning at noon on Saturday, March 22. Visitors of all ages may participate and engage directly with Company performers and teaching artists. Among the many activities planned, acclaimed Ailey teaching artist Nasha Thomas-Schmitt, master teacher and former Ailey principal dancer, will teach the distinctive movements of three of the most well-known pieces from the Company’s cornerstone work, Revelations, including “Rocka My Soul,” “Wade in the Water” and “I’ve ‘Been Buked.” In addition, as part of their Ailey Arts in Education & Community Programs, Thomas-Schmitt will be teaching a weeklong residency at Carver Middle School in Los Angeles, where Ailey once attended, from 3/17-3/21. Students will be coming to the Center on March 28 to experience live dance as part of The Center’s bus-in program.

Discover Ailey takes place in Segerstrom Hall on Wednesday, March 26 and features pre-show audience engagement activities as well as complete performances of D-Man in the Waters (Part I) and Revelations. New audiences can discover the energy, artistry and spirit of dance at these Theatre events.

Tickets to the Discover Ailey on March 26 are $29 and start at $25 for the complete performances on March 27 – 29. Tickets are now available online at SCFTA.org, by calling (714) 556-2787 and at the Box Office at 600 Town Center Drive in Costa Mesa. Group ticket discounts are also available. Free Preview Talks by Company members will be conducted one hour prior to each performance.