Home Business Are Blacks Being Denied by the U.S. Government? 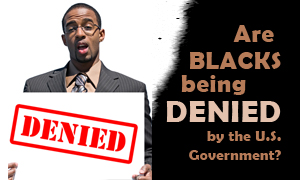 Only 1.7% of SBA Loans Went to Black Entrepreneurs

In 2013, U.S. banks and financial institutions made $382.5 million in Small Business Administration (SBA) loans to black-owned businesses. This may initially seem like a good deal of money, until you compare it to the aggregate amount of loans made. According to the Wall Street Journal, the amount of loans that black borrowers received was only 1.7 percent of the total $23.09 billion loaned to all small businesses that year. The concern is that the number of loans to black business owners is decreasing. In 2008, black businesses received 8.2 percent of total SBA loan dollars, so the 1.7 percent is a huge decrease. You can look at the numbers from a percentage of loans extended, but the story is the same; the numbers are decreasing. For example, in 2008, black business owners received 11 percent of SBA loans, but in 2013 that percentage dropped to just 2.3 percent. No matter how you look at it, it’s not good.

The excuses that banks are making

Banks are citing falling home values as one of the reasons for making fewer loans to Black borrowers whose credit has been affected. In addition, many of the larger banks who were making SBA loans to black business owners have gotten out of the SBA loan market altogether or drastically reduced the amount of SBA loans they are now making. Further, many lending institutions prefer to make larger loans since the SBA increased loan amounts in 2010 from $2 million to $5 million, and about 80 percent of black borrowers are requesting loans of just $150,000 or less.

Why this must change

No matter how you dissect the decline in the number of loans approved for black entrepreneurs, the decline is a big concern for black business owners who depend on SBA loans as an important source for their business financing. It is a lending direction that needs to be followed closely as it is certain to affect the business growth and future for America’s black business owners.
For more details about SBA loans for minority-owned businesses, visit www.sba.gov/content/minority-owned-businesses