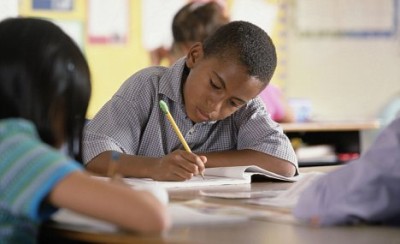 Most historians agree that the enslavement of Africans for profit remains one the darkest periods of American history. So why is an Arizona charter school teaching students that slavery actually benefited blacks?

According to a lawsuit against the Arizona State Board for Charter Schools by the Americans United for the Separation of Church and State, two books used by charters in Arizona, The 5,000 Year Leap and The Making of America by Cleon Skousen, teach Christian fiction and racist nonsense.

University of Baltimore legal scholar Garrett Epps told the Arizona Republic that The Making of America by Skousen are inaccurate.

“Parts of his major textbook, ‘The Making of America,’ present a systematically racist view of the Civil War. … A long description of slavery in the book claims that the state (of slavery) was beneficial to African Americans and that Southern racism was caused by the ‘intrusion’ of northern abolitionists and advocates of equality for the freed slaves,” Epps said.

The organization reached out to the charter school’s board to raise concerns about the school’s teaching of debunked and outdated information.

“Reading the text of The 5,000 Year Leap easily demonstrates that the book does not merely acknowledge the influence of religion in the nation’s founding, but actively promotes and endorses specific religious views and ideologies,” reads a letter from the Americans United for the Separation of Church and State to the charter school’s board, according to the Huffington Post. “For example, the fifth of twenty-eight principles taught by the book is that ‘All Things Were Created by God, Therefore upon Him All Mankind are Equally Dependent, and to Him They are Equally Responsible.’”

Here’s a bit of what your child will learn if they’re assigned to read The Making of America.

“If pickaninnies ran naked it was generally from choice, and when the white boys had to put on shoes and go away to school they were likely to envy the freedom of their colored playmates.”