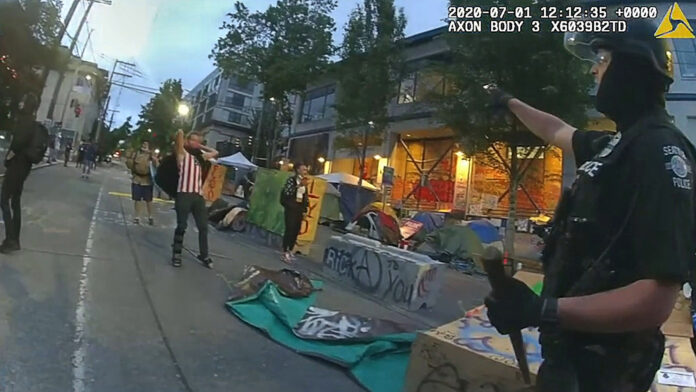 SEATTLE— An investigation by Seattle officials into a black woman’s claim that she was struck in the face by a police baton during a Black Lives Matter protest this summer has concluded that she was instead hit by a fellow demonstrator’s elbow. As a result, her complaint against the city has been dismissed.

The incident was filmed by a police body camera during a protest in Seattle, Washington, on July 1.

The altercation took place as police were clearing what was known as the Capitol Hill Protest Zone of protesters who had camped there for several weeks. The protests were ignited by the death of George Floyd, a black man who died while being arrested by Minneapolis police in late May.

Seattle police declared their intention to clear the protest zone of occupants on July 1 after several violent incidents there, including the fatal shooting of a 16-year-old boy, as reported previously by Zenger News.

In the video, the police are seen asking a small crowd of protesters to exit the area. A black woman, whose identity was not disclosed in the report, is seen shouting at officers and approaching them in a threatening manner. As she nears the filming policeman, an unidentified male protester positions himself between them as the officer raises his baton.

The baton appears to catch the woman in the face. However, a closer examination of the footage in slow motion shows the man’s elbow was knocked upward and struck the woman, the investigation concluded.

The female protester filed a complaint claiming that a policeman’s baton blow left her with a chipped tooth and a bloodied lip.

Both the woman and male protester were arrested and charged with failure to disperse on the day of the altercation. The status of the charges against them was not immediately available.