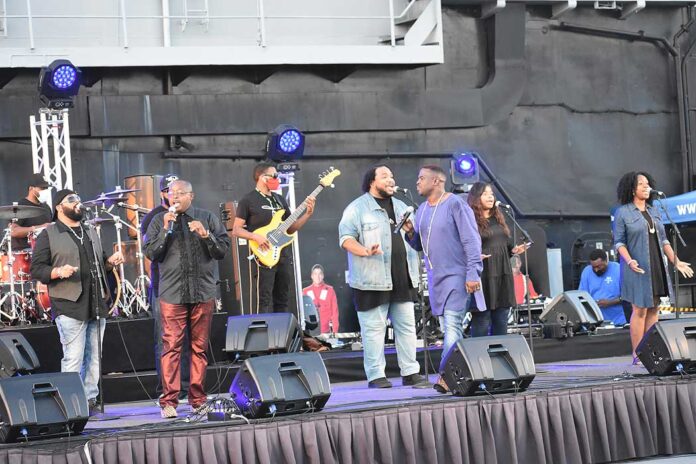 It was billed as a Virtual Benefit Concert to raise funds for the San Diego NAACP, the Salvation Army and Mandate Records’ nonprofit, Mandate Project Impact, all three very worthy causes. The event, held on the USS Midway Aircraft Carrier as it has been for the past 6 years, filled the air on what became a cool evening on the flight deck of this famous ship. Dr. Leonard Thompson did a masterful job of orchestrating this event and his wife, Evangel, along with her radio co host Walter, did an outstanding job on the red carpet with selected guests

The event was sponsored by BBVA, along with such entities as SDG&E, the Midway, NAACP, Mandate Records, GODRadio 1, the Salvation Army and San Diego Voice & Viewpoint. It featured such artists as Men For Christ, Fulfillment, Erisa Nicole, Robert Earl Dean, AJ and Family, just to name a few.

The big difference this year over last year’s event was the absence of the actual crowds on deck. The audience tuned in by the hundreds to follow the streaming of the entire evening online.

Mrs. Francine Maxwell, President of the San Diego NAACP chapter, did an excellent job of explaining why people should be joining and supporting the NAACP. The Colonel for the Salvation Army, serving as its spokesperson, truly highlighted the great work that organization continues to provide to those in need. San Diego Voice & Viewpoint Publisher, Dr. John Warren, in his “On the Red Carpet” interview spoke of the paper’s partnership and support for GODRadio1.com as the paper provides the print side to the radio station programming.

The event itself, with its spirit-filled entertainment, was truly an experience whether on deck or on the internet.