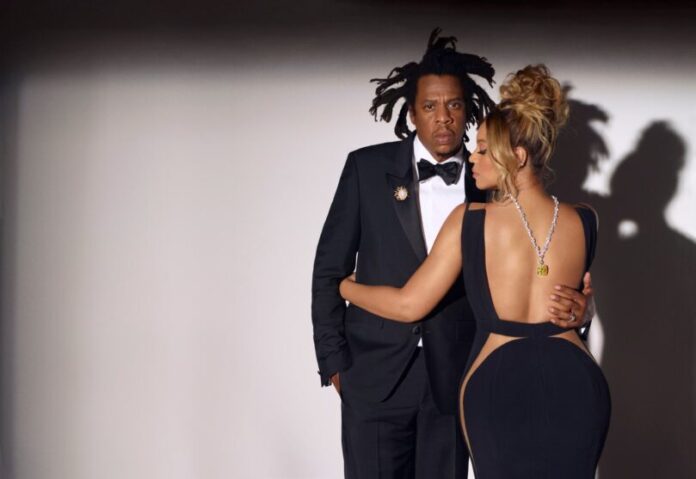 Leave it up to Beyoncé and Jay-Z to captivate social media and much of the world with more historic firsts.

The power couple stars in Tiffany’s latest advertising campaign, and the company calls it a celebration of modern love.

“Synonymous with the world’s greatest love stories since 1837, Tiffany’s debut of ‘About Love’ marks the latest evolution of the luxury jeweler’s new creative direction,” company officials stated in a news release.

“The campaign is the result of a close collaboration and a shared vision between both the Carters and Tiffany.”

Beyoncé wears the iconic 128-carat Tiffany Diamond in photos released this week, which the company purchased in 1878.

The pop queen becomes the first African American woman to wear the diamond, which had previously adorned Audrey Hepburn in publicity photos for the 1961 blockbuster film, “Breakfast at Tiffany’s.”

Singer Lady Gaga wore the diamonds to the 2019 Academy Awards.

But, as with most things they do, the Carters one-upped everyone.

They pose for photos in front of Jean-Michel Basquiat’s “Equals Pi” painting, a 40-year-old work from a private collection never previously displayed in public.

Unearthed in 1877 in the Kimberley Mines of South Africa, founder Charles Lewis Tiffany purchased the rough diamond in 1878, Tiffany’s said in the news release.

House icons including designs from Jean Schlumberger and the Tiffany T collection are also featured throughout.

Schlumberger was best known for dressing high society’s elite in the 1960s and ‘70s, so it is appropriate that his unmistakable designs live out his legacy on one of today’s greatest creative forces.

A film by acclaimed director Emmanuel Adjei has also been created and features a musical performance of the classic song “Moon River.”

Made famous in the 1961 film Breakfast at Tiffany’s, the iconic tune is reimagined with vocals by Beyoncé, captured by Jay-Z on a Super 8 camera.

According to Tiffany’s, the couple selected the Orum House in Los Angeles to serve as the setting for the film, in which nostalgic flashbacks are interwoven with cinematic, dreamlike visuals.
Basquiat’s “Equals Pi” appears once again as a common Tiffany Blue thread throughout the narrative.

“Beyoncé and JAY-Z are the epitome of the modern love story. As a brand that has always stood for love, strength, and self-expression, we could not think of a more iconic couple that better represents Tiffany’s values,” stated Alexandre Arnault, Executive Vice President of Product & Communications.

“We are honored to have the Carters as a part of the Tiffany family.”