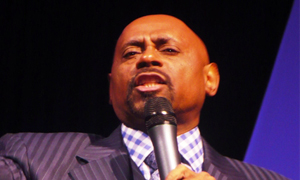 Nationwide — First, the good news: Bishop Paul Morton has declared he is no longer going to be a mindless puppet of the Democrat Party! After over 20 million African-Americans killed by abortion; the demand of President Barack Obama for Gospel Preachers to stop being bigoted and perform homosexual marriages; after the punking of the President and Democrat elected officials by the Teachers Union (not Putin) to destroy the Washington, DC School Voucher program (which all data concluded was working for poor African-American children in the poverty stricken city); after the Democrat Party removed all references of God from their platform and refused to recognize Jerusalem as the capital of Israel; after the partisan passing of legislation known as “Obamacare” that strips the church of its religious freedoms, the Bishop has finally put his foot down!

Now, the bad news: Bishop Paul Morton is a little confused and doesn’t remember what dispensation he is in. During the time of Noah, it is written, fallen Angels – Demonic beings – had sexual relations with women on the earth and produced giants – hybrid, unredeemable, monstrous beings. Because of these individuals, God destroyed the earth through the flood and started again with those who accompanied Noah in the Ark, eight individuals in all. The scripture from that point suggests fallen angels and humans producing Demonic progeny had ended. The point is: only a Demon or Devil can produce a “Demon Seed” or an actual child of the Devil. Bishop Paul Morton is under the impression that common everyday male human beings, through deliberate acts of lust and/or sexual violence, can create a demonic being that would thence be unredeemable. Biology would teach us that only a demon can produce a “Demon Seed”. Human beings can only produce human beings. Genesis declares everything produces seed after its own kind. Though often susceptible to demonic influence, humans through natural intercourse either by consent, or rape, cannot in point of fact, produce a demonic being. Yes, I know that some of you school teachers out there are shaking your heads, but this is unquestionably true!

Far more critical than the Bishop’s derision, is his present position as a Senior Pastor and Bishop, which readily enables him to not only confuse far more individuals than himself, but also demean unstable, broken souls looking for solace. The Bishop is apparently unaware that many persons – the progeny of victims of rape and incest – are sitting quietly in our pews. Imagine those seeking refuge and peace-of-mind in the church, those who would come into our sanctuaries seeking sanctuary, and then hear a sermon preached from the pulpit telling them in no uncertain terms, they are the progeny of Lucifer. No doubt they have repeatedly wondered about whether or not they should have ever been born. It’s very easy for them to feel like misfits and rejects by society. These very same persons have often been given up by their Mothers and raised by a caring parent, or parents, who were willing to adopt and provide a home. Yet even loving parents cannot always defeat the tormenting spirits which attack the minds of children conceived in rape and incest. Certainly, if there is a place where they should find solace, comfort, and understanding, it should be the church.

“Demon Seed…?” When you discuss Louis Armstrong, the world renowned jazz trumpeter who was inducted into the Jazz Hall of Fame, and regarded by many as the most famous Jazz musician in the world, do you ever think of him as a demon seed? Yet he was the product of rape and incest. Let’s consider the Abolitionist, Preacher, autobiographer, bank president, and US Marshal by the name of Fredrick Douglass. Can we name another African-American who has made a greater contribution to this country in his time? “Demon Seed…?” Satan had nothing to do with Fredrick Douglass’ success, and he, too, was the product of rape. How about Michelangelo? How many times has his painting of “The creation of Adam” been duplicated for the world to see, and his historic contribution to the world by painting the ceiling of the Sistine Chapel? Michelangelo was the product of rape and incest. Or James Robinson, the famed TV Evangelist. He and his wife have dedicated their lives to serve humanity, and themselves, to the feeding of millions living in Africa. James Robinson was the result of a forcible rape of his mother. And then there was my dad’s favorite, Eartha Kitt, who was a world renowned star of stage, screen, and television. Mom may say she was devilish but certainly not a “Demon Seed…” Eartha Kitt was conceived in rape.

I could go on and on but as we Baptist Preachers would say: I will close with Ethel Waters. When you read of the accolades poured upon Ethel Waters by the world’s most famous Evangelist, Billy Graham… her angelic voice… her walk of grace and dignity… “Demon Seed” is not ever ascribed to her, though her mother at age 13, was raped, and later gave birth to this world renowned vocalist and Gospel singer. We all must come to the conclusion, despite the means by which they were conceived, it is clear to all their significant contribution to society, along with the divine hand of God in their lives. As Ethel Waters might say, “His eye is on the sparrow and I know he watches me…”

Bishop Paul Morton also has done far too much to further the Gospel, to be a mentor, and positive example to the church, as well as its clergy, to have it negated by an ill-conceived statement, so I would ask he rethink his words, recanting his statement, lest he ill advisedly demonize a segment of our society needing our understanding and loving affirmation. And in that vein…

…Last, but certainly not the least, I could not forget Rainbow Coalition’s president and Civil Rights Activist, Jessie Jackson. Rev. Jessie Jackson was even scheduled for an abortion, yet his mother chose to cancel that appointment with death and raise him despite the odds against her and Jessie. It’s a shame this onetime Jedi Knight is now an advocate for the dark side. What ever happen to, “do unto others as your mother did unto you….”

Rev. Dr. Clenard H. Childress, Jr. is the founder of www.BlackGenocide.org – a website designed to reach the Afro-American community with the truth about abortion.