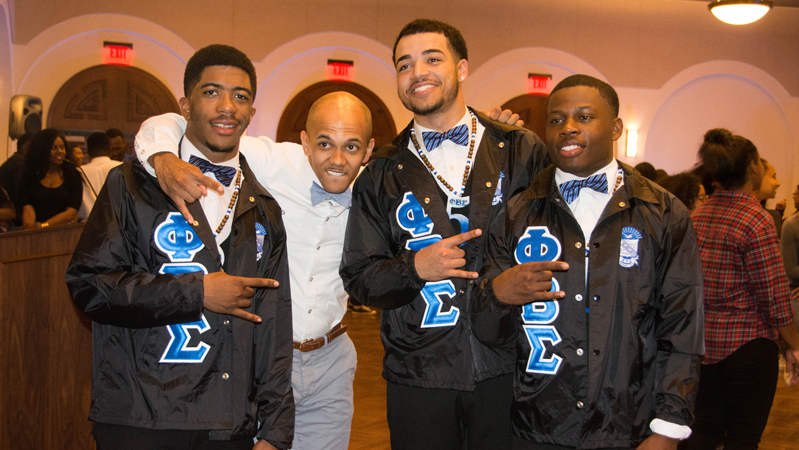 On May 5 history was made at the University of San Diego in Linda Vista when Phi Beta Sigma Fraternity Inc. – Omicron Iota Sigma Chapter brought in its first installation of new members at the University.

The University of San Diego, founded in 1949, has 18 fraternities and sororities within its Greek community comprising approximately 34% of USD’s student body, according to sandiego.edu.  No historically Black Greek Letter Organizations have ever been officially recognized as members of the university’s Interfraternity or Panhellenic Councils.  During the school’s history in San Diego, several other historically Black Greek Letter Organizations have had respective members on campus as students, yet the organizations themselves did not enjoy official membership on campus.  In the fall of 2015, university officials met with officials from Phi Beta Sigma Fraternity Incorporated to develop a plan to bring the school’s very first sanctioned NPHC (historically black) fraternity into existence.

The planning took place at the Phi Beta Sigma International Headquarters level, Regional, and local levels with members of several greater San Diego chapters participating in laying the framework to bring Phi Beta Sigma at USD to life.  The USD Sigmas, as they are informally known, completed the membership intake process for Phi Beta Sigma Fraternity on the university’s campus under the direction of members from the Omicron Iota Sigma Alumni Chapter of Phi Beta Sigma.  The OIS Chapter will serve as the Fraternity’s Collegiate Advisory Alumni Chapter once the new USD Sigma chapter meets the appropriate university charter membership guideline.  Until then, the new USD Sigmas will grow their membership and acclimate themselves to their new status on campus.

Other NPHC organizations, including Kappa Alpha Psi Fraternity, Inc., Alpha Kappa Alpha Sorority, Inc., Omega Psi Phi Fraternity, Inc., and Phi Beta Sigma have enjoyed representation via individual student members or faculty members on USD’s campus.  The organizations at that time were unable to operate with chapter inclusion in the university’s Greek life because those respective students were part of metro or citywide chapters within their respective organizations, which were not under the university’s direction.

Three young men, Greg Spruell, Myles Ginyard, and Jordan Harrison are the first African-Americans to join a historically Black fraternity exclusively recognized and sanctioned at USD in the schools 66-year history.  Spruell (24) is in the United States Navy assigned to the U.S.S. America.  Ginyard (20) from Washington D.C. is a business finance major, and Harrison (21) from Bakersfield is a behavioral neuroscience pre-med major.  Both are juniors at USD and they will shoulder the responsibility of growing the new chapter on campus over next fall with the help of the OIS Alumni Chapter.  They will have a busy summer attending fraternity functions, and training, including attending workshops at the Serious Sigma Summit in Orlando, Florida from July 7-10, 2016.

For more information about the USD Sigmas go to www.sandiegosigmas.org.