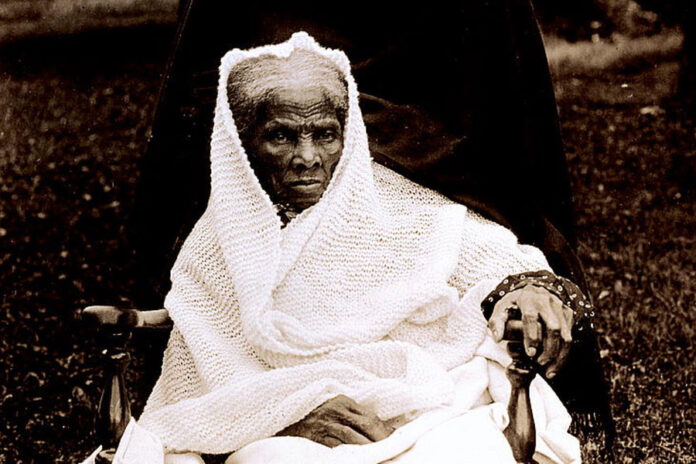 “We knew what family meant to her,” said Ernestine (Tina) Martin Wyatt great-great-great-grandniece of Tubman, in a Focus features interview when the movie, “Harriet” debuted last November. “Her love of family was one of the things that was perpetuated. The other thing was her faith, a belief in taking yourself out of the center in order to serve the needs of other people. That is really something that has been passed down from aunt Harriet to my great-grandmother to my grandmother to my mother and now to me. And I am passing the same beliefs down to my children and my grandchildren.”

By Our Weekly, Los Angeles

“The right of citizens of the United States to vote shall not be denied or abridged by the United States or by any state on account of sex. Congress shall have power to enforce this article by appropriate legislation.”  — The 19th Amendment:

This year marks the 100th anniversary celebration of American women’s right to vote. The passage of the 19th Amendment was won after a 72-year long struggle led by a number of prominent women, including one Harriet Tubman (1822 – 1913).

Tubman, a former slave and a “conductor” on the Underground Railroad for eight years, was also an abolitionist and political activist. She became a passionate suffragette, attending local meetings and national conferences.

When asked if she believed in women’s suffrage, she said “I suffered enough to believe it.”

Ernestine (Tina) Martin Wyatt is a great-great-great-grandniece of Tubman. An artist and activist, Wyatt’s work is featured as a permanent collection in the Reginald F. Lewis Museum of Maryland African American History and Culture.

Wyatt joined other descendants of historical Blacks — Fredrick Douglass and Ida B. Wells — who were featured on the city of Pasadena’s float, “Years of Hope, Years of Courage” during the Rose Parade last month. The women’s suffrage centennial float was designed as a symbolic reminder of the responsibility to vote, and to continue the fight for equality and inclusion.

The day after the parade, Wyatt received a commendation from the office of County Supervisor Kathryn Barger, which read:

“As an innovative and ground-breaking educator, co-founder of Harriet Tubman Day and the Celebrate to Educate program in Washington D.C., you continue in her (Tubman’s) footsteps to inspire youth and educate young people about her many historical achievements during the underground railroad, civil war, emancipation and through the American suffrage movement.”

Wyatt’s great-grandmother worked alongside Tubman and also lived with her for a short period. Wyatt’s grandmother saw Tubman as just another aunt.

“We knew what family meant to her,” Wyatt said in a Focus features interview when the movie, “Harriet” debuted last November. “Her love of family was one of the things that was perpetuated. The other thing was her faith, a belief in taking yourself out of the center in order to serve the needs of other people. That is really something that has been passed down from aunt Harriet to my great-grandmother to my grandmother to my mother and now to me. And I am passing the same beliefs down to my children and my grandchildren.”

Black men gained their voting rights with the passage of the 15th Amendment to the Constitution, which was ratified in 1870. Wyatt understood why Tubman would join the fight to pass the 19th Amendment.

“It only takes one person to change things,” Wyatt said. “It is like a domino effect — what we do and how it affects others in a positive way.”

Michelle Duster is an award-winning author, speaker, historian and writing professor at Columbia College in Chicago. She is the great-granddaughter of prominent journalist, abolitionist and feminist Ida B. Wells (1862 – 1931). Wells was freed by the Emancipation Proclamation and went on to lead an anti-lynching crusade in the United States in the 1890’s. She also co-founded the National Association of Colored Women (NACW) in 1896 and was on the front lines of the Women’s Suffrage Movement.

Duster has written, published and contributed to a total of nine books, two of which include the writings of her great-grandmother: “Ida in Her Own Words” and “Ida from Abroad.” She gives presentations about her work to make sure that Wells’ legacy does not fade from public memory.

“I learned at an early age that my great-grandmother, Ida B. Wells, was a force to be reckoned with,” Duster writes in one of her articles. “At the end of the 19th century, as an investigative journalism pioneer, she uncovered and documented in meticulous detail the violence of lynching.”

In 1913, Wells founded the Alpha Suffrage Club, the first African American women’s group that advocated for the right to vote. The club aimed to give a voice to Black women who had been excluded from other suffrage organizations. Although women in Chicago were granted the right to vote in 1910, Whites tried to ban Blacks from voting altogether.

As Wells stated in her autobiography: “We (women) could use our vote for the advantage of ourselves and our race.”

Morris contributed to the afterword to “Picturing Frederick Douglass: An Illustrated Biography of the Nineteenth Century’s Most Photographed American.” He also wrote the forward to the 2017 centennial edition of the “Narrative of the Life of Frederick Douglass, An American Slave,” which the Library of Congress named one of the 88 books that shaped America.

Douglass, whose biography was published in 1845, escaped slavery as a young man and devoted his life to ending it through his abolitionist speaking engagements. He became an adviser to President Abraham Lincoln. Later, he used the platform of his newspaper, the North Star, to enlist petitioners to sign the declaration supporting women’s rights.

A believer in the equality of all, Douglass was the only African American to attend the Seneca Falls Convention, the first women’s rights convention, held in upstate New York, where he spoke in favor of women’s suffrage.

Morris now carries the abolitionist torch of his ancestor’s legacy with his work in the fight against modern day slavery and his co-founding of the Atlanta-based non-profit Frederick Douglass Family Initiatives (FDFI), which has its mission to advance freedom through knowledge and strategic action.

He began his activism when a buddy passed along a magazine.

“The cover story was of 21st century slaves and I reacted the way I think most people do,” Morris said. “Slavery didn’t end with the work of Frederick Douglass, and I have two teenage daughters, who at the time were 12 and 9 years old. I got up and walked into my girls’ room and I found that I couldn’t look them in the eyes and not do anything.”