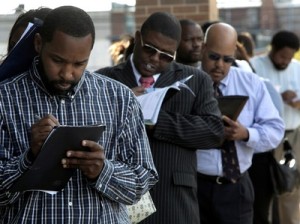 WASHINGTON (NNPA) – The Black unemployment rate climbed from 10.7 percent in June to 11.4 percent in July, an increased attributed to more African Americans looking for work and finding it.

“Building off the strength of the previous month, people have been encouraged to re-enter the labor force and search for work and that caused the unemployment rate to tick up slightly,” said Valerie Wilson, an economist and director of the Economic Policy Institute’s Program on Race, Ethnicity, and the Economy (PREE). “Overall, this is a good report, but it’s not a report that indicates that the economy is continuing to build steam.”

“People who put themselves on the bench are now saying, ‘I’m coming off the bench, I want to try and find a job now,’” said William Spriggs, chief economist for the AFL-CIO. Spriggs, former Assistant Secretary of Labor in the Obama administration said people are taking action because jobs are being created. “People are actually feeling it,” he explained.

In a statement posted on the Center on Budget and Policy Priorities’ website, Chad Stone, chief economist at the center, said that July’s jobs report shows that the labor market is “moving in the right direction, but still has a ways to go before everyone who wants to work has a reasonable chance of finding a suitable job.”

“Seven months later, long-term unemployment remains higher than when any of the previous seven emergency unemployment programs expired after previous recessions,” wrote Stone. “In addition, the share of the population with a job remains well below where it was at the start of the recession.”

Researchers at the Economic Policy Institute said that July’s jobs report “showed decent growth,” but the 209,000 jobs that were added last month were a steep decline from the monthly average of 277,000 jobs added during the second quarter.

“Even at 209,000 jobs it would still take four years to get back to where we were. In another less severe recession, 209,000 would be great numbers but given the depths that we’re coming back from, we’re going to need a little more than that to get back to full strength more quickly,” said Wilson.

Wilson added: “The first half of this year has been pretty positive. We’ll keep looking ahead and hope things continue to move in the right direction.”