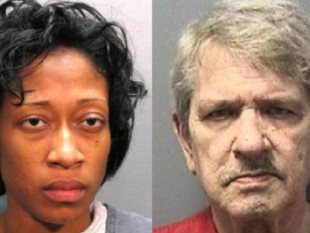 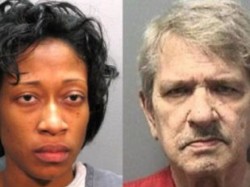 On March 10 of this year, around midnight, Ralph Wald, 70, of Brandon Florida, got out of bed  to get a drink and found Walter Conley, 32, having sex his wife, Johanna Lynn Flores, 41, in the living room. He immediately went back into his bedroom, grabbed his gun and shot Conley three times. Conley died.

Wald claims that he thought Conley was a stranger who had broken in and was raping his wife – despite the fact that Conley lived next door, had been his wife’s roommate and lover, and had his wife’s name tattooed onto his neck and arm. During a 911 call, when the dispatcher asked Wald if the man he shot was dead, Wald responded, “I hope so!”

Wald never used the word rape in later reports to police, opting instead for “fornicate.” And while the fact that the two were lovers doesn’t imply consent, Flores has never accused Conley of rape — nor do prosecutors buy that that’s what Wald actually thought was happening. They say that Wald, who suffers from erectile dysfunction, killed Conley in a jealous rage.

Flores admits that she and Conley had sex regularly before and after her marriage to Wald. While testifying, Wald explained that his erectile dysfunction and his wife’s reluctance to have sex with him made them compatible: “In fact, she would joke a lot with me … that we were a perfect couple… She didn’t want to do it, and I couldn’t do it.” On May 30, after deliberating for two hours, a jury found Wald not guilty. After the verdict was announced, Wald continued to show no remorse: “If the same thing Happened again, I would do the same thing.”

On Aug. 1, 2010, Marissa Alexander, a 31-year-old mother of three, with a Master’s degree and no criminal record, was working for a payroll software company in Jacksonville. She was estranged from her abusive husband, Rico Gray, and had a restraining order against him. Thinking he was not at home, she went to their former house to get some belongings. The two got into an argument.

Marissa Alexander says that Gray threatened her and she feared for her life. Gray corroborates Marissa Alexander’s story: “I was in a rage. I called her a wh*re and b*tch and . . . I told her… if I can’t have you, nobody going to have you,” he said, in a deposition. When Marissa Alexander retreated into the bathroom, Gray tried to break the door. She ran into the garage, but couldn’t leave because it was locked. She came back, he said, with a registered gun, which she legally owned, and yelled at him to leave.

Gray recalls, “I told her… I ain’t going nowhere, and so I started walking toward her…I was cursing and all that… and she shot in the air.” Even Gray understands why Marissa Alexander fired the warning shot: “If my kids wouldn’t have been there, I probably would have put my hand on her. Probably hit her. I got five baby mommas and I put my hands on every last one of them, except for one …. I honestly think she just didn’t want me to put my hands on her anymore so she did what she feel like she have to do to make sure she wouldn’t get hurt, you know. You know, she did what she had to do.”