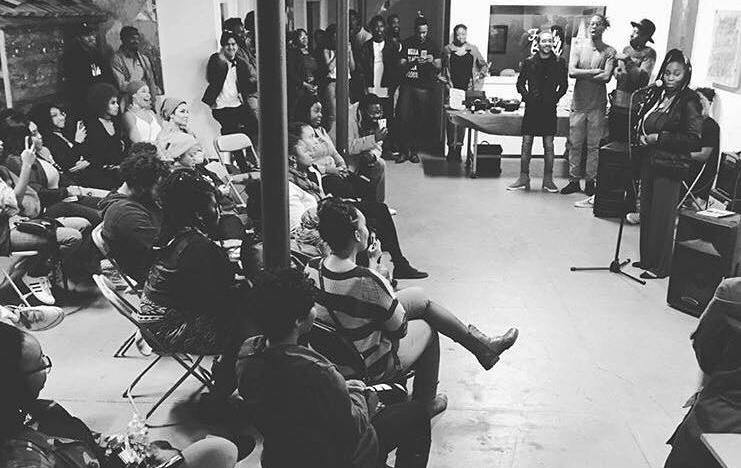 You know you’re at a great party when the DJ drags your spirit back to the dance floor with his song selection every time you try to leave. This is the scenario that plays out every Friday at ThCrch (2185 Logan Ave.) in Barrio Logan for Black Xpression. During the seven months the open mic has been in existence, Black Xpression has cemented itself as the premier open mic space for black youth to come express themselves, connect with like minded individuals, and escape from a world that often marginalizes their voices.

From 8-10pm, ThChrch is filled with poetry and music from local artists along with visits from out of town acts that come down to showcase their talents on special nights.

“This is a place where you can be yourself %100 percent,” said Jeffrey McKinnie, host of Black Xpression. “We don’t often have that room to really express ourselves the way we want. I want people to know that if you feel something, we want you to be able to be heard. We are here for you and to listen to you. You’re connecting with the person sitting next to you even though you’ve never met them before. That’s what makes Black Xpression special.”

Ronald Williams, Black Xpression’s creator, was a student at Southwestern College when the idea to start the open mic came to him.

“I was noticing how popular the open mic platforms have been becoming. I reached out to some friends and talked about the potential of doing our own show. We wanted to capitalize on the opportunity.”

The name ‘Black Xpression’ was an intentional selection for Williams and his team to make a statement about the environment they set out to create.

“We wanted to have something that represented culture,” said Williams. “Just the word ‘black’ by itself is such a bold statement. We wanted people to understand it was a cultural event. It’s interactive, it’s loud, it’s bold, and it’s black.”

Along with the poetry and music, multiple dance breaks and singalongs from the audience break out, creating a family reunion type of environment that epitomizes the blackness of the event. The maestro of these golden moments is DJ Cliff, who possesses a unique gift to drive audiences crazy with his song selection.

“I grew up with my both my parents and they had a wide range of music. Predominantly hip hop. When I got older I dabbled more into it and I loved it because it hit my spirit. My music selection comes from my love for hip-hop and the culture. When I see people respond to my music I get inspired to play more and keep them going.”

The environment Black Xpression creates attracts talented artists to ThChrch every week to add their work to the mix. Spoken word poet Kelsey Olivia Daniels frequents the open mic often and has joined in on the production side as well, often helping transport chairs to the event.

“A lot of the people who are the founding members of Black Xpression are not people who have had super long careers. We all love to create and we’re hungry. It creates an environment that’s supportive, engaging and relatable to new artists who are trying something different.”

Jade Robinson is a newcomer to the open mic and found the benefits from it extend far beyond entertainment.

“Fridays are the only days I have to myself. Even when I’m having a bad day or feeling like not coming, I know if I go they’re going to bring me up and I need that. It feels like family here. It’s cool to be around people who really care and want to hear you out.”

This is a common story for many who experience Black Xpression for the first time. A spirit of loyalty and dedication is planted in everyone who visits. Greg McKnight Jr., who works the door at the event and performs at the open mic often, optimizes the passion many grow to have for Black Xpression.

“I feel like I’m at home at every time. The embracing of the culture and how we bring up people of color contribute to this feeling. This is the first time I’m a part of something where I see the majority of the expression come from black spirits. It’s really special. It’s a little piece of paradise. It’s calming, peaceful and healing. I look forward to this every week.”