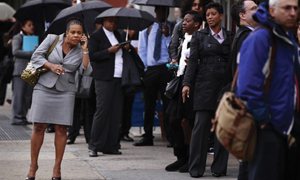 WASHINGTON (NNPA) – The Black unemployment rate hit a six-year low in June, dipping below 11 percent for the first time since August 2008.

The fall in the Black unemployment rate was accompanied by an increase in the groups labor force participation rate, which measures the share of Black workers holding jobs or looking for jobs. When the labor force rate rises, researchers have found that workers generally have a more positive outlook on the economy. In June, the Black labor force rate rose to 61 percent from 60.8 percent the previous month.
In a blog post on the jobs report, Valerie Wilson, the director of the Program on Race, Ethnicity, and the Economy at the Economic Policy Institute, said that the increase in the labor force rates for Blacks and Latinos was another indicator that June jobs report was a strong one.

“The share of working age African Americans with a job has increased 1.3 percentage points since January 2014 and the increase for Latinos has been six-tenths of a percent, compared to an increase of one-tenth of a percent for Whites,” wrote Wilson. “The June employment growth accounts for over half of this increase for African Americans and all of the gains for Latinos and Whites. These gains also bring the Black-White unemployment gap to the lowest level this year at a ratio of 2-to-1.”

Wilson added: “The fact that employment is now growing more strongly for African Americans and Latinos demonstrates how critical continued strong job growth will be to further reducing unemployment for people of color and narrowing racial unemployment gaps.”

The national unemployment rate was 6.1 percent and employers added 288,000 jobs in June. The jobs numbers for April and May were revised upwards, combining for an additional 29,000 jobs over the two-month period.

Speaking in Washington, D.C. about the latest jobs report, President Barack Obama said that the United States has seen “the fastest job growth in the United States in the first half of the year since 1999” and “the quickest drop in unemployment in 30 years.”

Obama continued: “So it gives you a sense that the economy has built momentum, that we are making progress. We’ve now seen almost 10 million jobs created over the course of the last 52 months. And it should be a useful reminder to people all across the country that given where we started back in 2008, we have made enormous strides, thanks to the incredible hard work of the American people and American businesses that have been out there competing, getting smarter, getting more effective.”

In a statement on June’s jobs report, Chad Stone, the chief economist at the Center on Budget and Policy Priorities, wrote that even though the report showed “encouraging signs that the labor market is healing,” millions of workers continue to struggle through periods of long-term unemployment.

Washington lawmakers cut a crucial lifeline when they failed to extend emergency unemployment insurance (UI) at the end of last year. Millions of out-of-work Americans will lose their UI benefits by the end of 2014, if Congress doesn’t act.

Earlier this year, the Obama administration encouraged companies to sign a pledge to improve opportunities for workers who have been unemployed for 27 weeks or longer, a condition that Blacks suffer at disproportionate rates compared to Whites.

Companies that signed the pledge agreed to review current recruitment and hiring practices said that they would make sure employment listings didn’t discriminate against the long-term unemployed or discourage them from applying.

“It’s a sort of economic patriotism where you say to yourself, how is it that we can start rebuilding this country to make sure that all of the young people who are here but their kids and their grandkids are going to be able to enjoy the same incredible opportunities that this country offers as we have,” said Obama. “That’s our job. That’s what we should be focused on.”