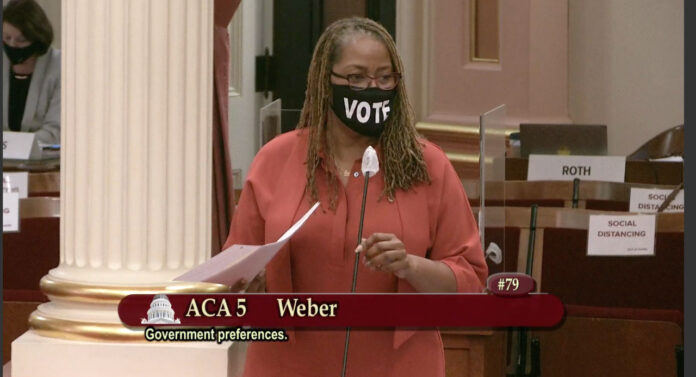 On Wednesday, June 24, the full California Senate voted 30-10 to pass Assembly Constitutional Amendment  5 (ACA 5), an initiative to overturn Proposition 209 and reinstate Affirmative Action in the state after 24 years.

The constitutional amendment will now appear on the general election ballot in November for voters to decide whether to approve it or not.

Assemblymember Dr. Shirley Weber (D-San Diego), chair of the Legislative Black Caucus (CLBC), and Assemblyman Mike Gipson (D-Carson), co-introduced the bill. It is among the legislations deemed a priority for the CLBC in 2020.

If voters approve the amendment in November, California will join 42 states that allow equal opportunity programs that support women and minorities.

“What your vote means today, in supporting ACA5, is that it would allow not just the 115,000 who signed a petition in opposition to it,” said Sen. Holly J. Mitchell (D-Los Angeles), a member of the California Legislative Black Caucus on the Senate floor before the vote. “It will allow the 40 million residents to have the opportunity to weigh in. So colleagues, we must be affirmative in the action we take to bend the arc towards justice.”

ACA 5 moved through both houses of the state legislature without much friction. On June 10, the full California Assembly voted 60-14 in favor of the bill before it moved to the Senate.

In 1996, voters passed Prop. 209 Also called the “California Civil Rights Initiative,” it banned discrimination or preferential treatment based on race or gender in public education, employment, and contracting.

Pete Wilson was the governor of California when the constitutional amendment was enacted. Since becoming law, Prop. 209 has been a constant point of contention between opponents and supporters. People who oppose it point to data that shows how African Americans and other minorities have been negatively impacted by it in different arenas, including public sector employment, state government procurement and public university enrollment.

“We are the ones we’ve been waiting for. On this historic day I am incredibly grateful to all my colleagues,” Weber tweeted after the Senate yay vote. “We have a long way to go to achieve equality, but we are one step closer today,”

Although ACA 5 has increasingly gained widespread support across political, cultural and socio-economic divides in California, some of its staunchest critics remain vocally opposed. The Asian American Coalition for Education (AACE) and the Silicon Valley Chinese Association Foundation (SVCAF) are two groups that have organized to apply pressure on legislators to vote no.

The California Federation of College Republicans (CFCR) submitted an opposition letter, signed by 26 registered student organizations, to the California State Senate ahead of this week’s floor vote.

The letter notes how approval of ACA 5 would negatively affect Asian-American students.

Another student organization, the Cal State Students Association, which has a membership of nearly half a million students enrolled in the state’s three systems of higher learning, wrote a letter in support of ACA 5.

“Since the passage of Prop 209, admissions rates for Asian American students in California’s most competitive schools have continued to decline, as has been the case for Native Americans, Black and Latinx students,” it read.

“The California state Senate has the power to take a strong stance against racism and allow Californians the opportunity to vote to restore affirmative action and create a more fair, just and equitable California,” the letter stated.