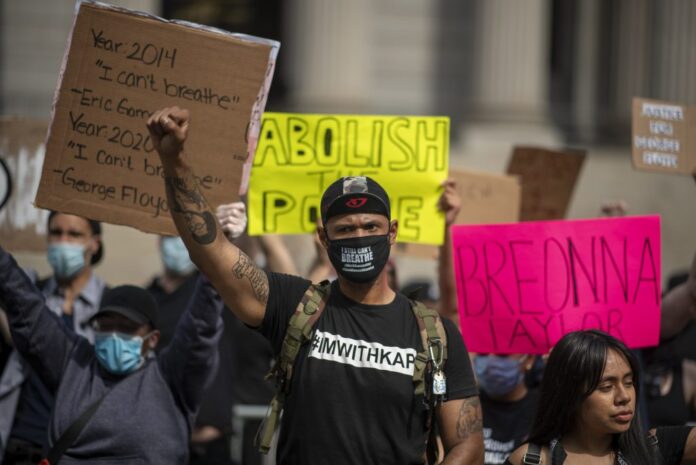 As mass protests continued across the state Tuesday, the California Legislative Black Caucus CLBC) called for lasting change in race relations — as well as reform in social justice policy — in California and around the country. Standing six feet apart and wearing masks to protect against the spread of COVID-19, the lawmakers held a press conference at the state Capitol to address what they described as a “pandemic of hate.”

Assemblymember Dr. Shirley Weber (D-San Diego), chair of the CLBC, condemned the destruction and looting that sidelined the demonstrations in California and across the nation. The protests erupted about a week ago after Minneapolis police killed George Floyd, an unarmed Black man, on Memorial Day.

“The issue we’ve faced for over 400 years is the enslavement, mistreatment, and often the efforts of genocide of the African in this country,” said Weber, in a powerful statement that condemned the brutal death of Floyd.

In their statements, caucus members echoed Weber. They made the case that sustainable social and economic change in America starts with acknowledging that racism and injustice towards African Americans today is linked to slavery, and it can be traced to the decades of segregation and discrimination that followed.

She also said it is important not to limit the public conversation to the loss of property without addressing the deeper problems.

Weber offered emotional historic examples of public lynching of African American men and the separation of enslaved women from their children. It’s a part of U.S. history, CLBC members said.

CLBC leaders also highlighted victories such as the passage of police reform legislation. Last year, Gov. Gavin Newsom signed a bill, AB 392, into law that Weber authored. The groundbreaking legislation limits when police can use deadly force. The legislation, which was fiercely opposed by police unions in California, is now being lauded by activists, policy makers and law enforcement experts across the country as one of the strongest and most effective actions taken by any state to reduce police shootings.

Another bill the CLBC supported, Senate Bill 227, which would have changed the way officer-involved shootings are investigated was signed into law by former Gov. Jerry Brown in 2017 but has since been declared “unconstitutional” and overturned by the California Court of Appeal.

State Senator Holly Mitchell (D-Los Angeles) authored the bill and said the fight for criminal justice reform is met with strong police union resistance in the Legislature and continues in the courts.

Weber also spoke about CLBC’s history of fighting for equality, civil liberties and economic justice for Blacks that has ended up benefiting all Americans.

“We have kicked down doors of opportunity for everyone only to have them run over our back, and snatch those opportunities off the table and forget from whence they have come,” said Weber.

One of Weber’s latest bills is ACA 5 co-authored by Assemblymember Mike A. Gipson (D-Carson). It would give voters a new chance to weigh in on affirmative action, which was banned when voters passed Proposition 209 in 1996. Supporters say ACA 5 would remove roadblocks to opportunities for women and people of color. Some opponents argue that the policy is discriminatory. Weber says, as of now, she doesn’t have the two-thirds majority votes needed to pass the measure.

Throughout her eight years in the Assembly, Weber says she’s faced resistance to efforts to improve conditions for African Americans.

“It becomes painful to continue the conversation. Weber said she’ll keep on advocating for equality and called on allies to share in the responsibility.

Standing with the CLBC were members of the Progressive Caucus, The Latino Caucus, the LGBT Caucus, the Asian &Pacific Islander Caucus and Women’s Caucus.

“We know that the solution lies in the changing of this nation,” Weber said, urging allies to take up the banner and fight along with African Americans. “The battle that is so essential,” she said.