Home Business Chida R. Warren-Darby Named One of Youngest Black Co-Publisher’s in the... 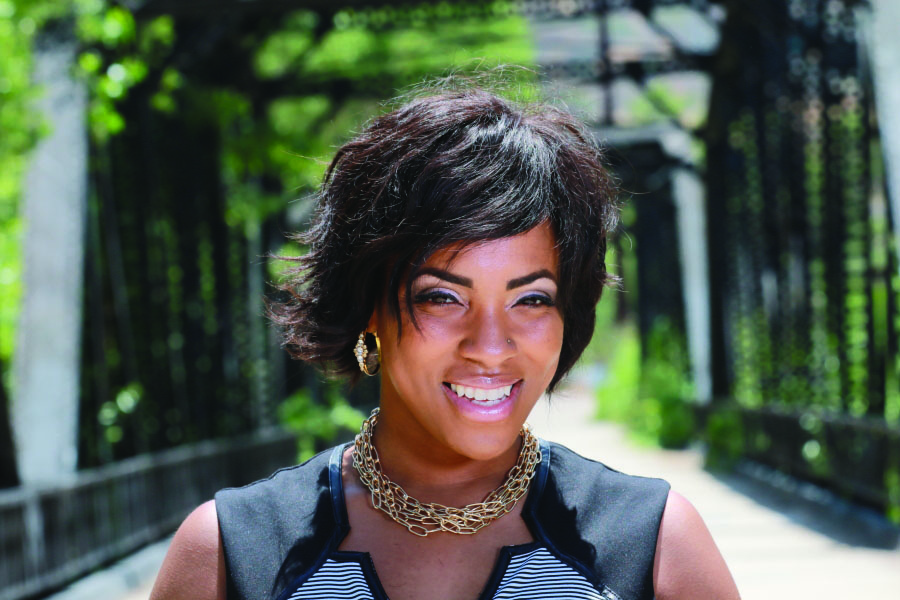 Dr. John E. Warren, publisher of the Voice & Viewpoint Newspaper, recently announced the promotion of Chida Warren-Darby, to co-publisher of San Diego’s oldest and largest Black publication, now in its 55th year. She is assuming this position held by her late mother, Gerri Warren, who passed in 2009. “As co-publisher, Chida will have equal authority in the operation and administration of the Voice and Viewpoint, while receiving assistance from me where necessary,” he shared. At 34, Warren-Darby is one of the youngest newspaper publishers in the nation. “This position is one that Chida has earned, and I am sure she will continue to grow and improve this newspaper as she has already done for the past 5 years.” In 2010, Warren-Darby assumed the role of managing editor and CAO of her family’s operation, after relocating from Baltimore, MD and working at the Johns Hopkins Hospital. “As managing editor, I handle a lot of administrative duties within the office – the day to day operations. Family business is not easy, and definitely has its challenges, but it has been an amazing learning experience. My father has a wealth of knowledge, and each day that I work with him, I learn more and more. It actually just shows how much I didn’t know,” she laughed. “You can’t buy the historical viewpoints and experiences that he brings to the table.”
In 1987, Warren and his late wife purchased the newspaper, and grew it into an award winning publication that spans all 89 zip codes and 17 cities of San Diego. “I was six years old when they bought the newspaper. I grew up in this business, coming here after school every day,” she recalls. “I tried hard to run from it, but it’s in my blood. I even tried to leave San Diego, and assume another identity elsewhere, but God had other plans.” Chida says she’s grateful that her father recognizes her efforts and is looking forward to all the vast things in store for them both. In 2014, the publication hosted its inaugural anniversary gala, which was established to highlight the efforts of those within San Diego’s African and African American communities. “The gala allowed me to tap into my event planning side,” she said. “It makes me feel the way cooking makes a chef feel, or an artist about their masterpieces. I appreciate Dr. Warren giving me the flexibility to explore the different things that we can do to bring the community together.” While the promotion may come as a shock to many, it solidifies her place in the family’s legacy. “He’s been telling people that I’m his boss for a long time. I guess he was preparing them for the big announcement,” she laughed. “Anyone that knows Dr. Warren knows he’s running the show. But in all sincerity, I don’t take it lightly that he’s willing to share the leadership with me, and I am humbled.”
Dr. Warren has a long history of service to his community. He holds a B.A. in Liberal Arts from Howard University, completed graduate studies in Public Administration at the University of Southern California and received his Juris Doctorate in Law from Howard University. He spent 12 years as a Congressional staff member where he drafted several civil rights laws and directed a number of research projects, working with the likes of the late Shirley Chisholm, Adam Clayton Powell and Gus Hawkins. “I love hearing his stories about working on Capitol Hill, and the time he spent on the D.C. Board of Education,” Warren-Darby shared. Some days you can venture by the newspaper, and hear him sharing stories of sitting and chatting with Malcolm X on early mornings, while opening the office for Powell; or hear him flashback to how he climbed up in a tree, like Zacchaeus, to hear Dr. Martin Luther King’s speech on the mall in D.C. “Every day it’s a new story, and more insight to the man he is. It’s like being in the movie ‘The Karate Kid’. I never know when something he’s said is going to come into use.”
Chida says she enjoys what she does and welcomes the challenges ahead. “Being a publisher is an honor. I don’t take the task of reporting the news lightly. We have the ability to shape thoughts and change lives,” she expressed. “I’m looking forward to further bridging gaps in our communities across the city, as well as keeping our readers informed. I stand on the shoulders of some great men and women, including my parents, that made it possible for me to read, write, and communicate my thoughts freely.” Her prayer is to always keep God first and to keep her community’s needs close to her heart. “I’m passionate about this business. God has blessed and sustained us, even at times when others felt like we wouldn’t make it. My Heavenly Father has a purpose for us, so we’re still here against all odds.” Dr. Warren and Chida both say they’re looking forward to showing new facets of the newspaper to its readers. In the near future, she plans to move full steam ahead in event planning for the newspaper, and working more with the young adult population – keeping them engaged in social issues and pushing them more towards advocacy. But for now, she’s seeing everything in black and white. “I love print media, and everything about it. We’re more than a newspaper,” she said. “We’re so much more… just wait and see.” It’s a challenge and she’s game.