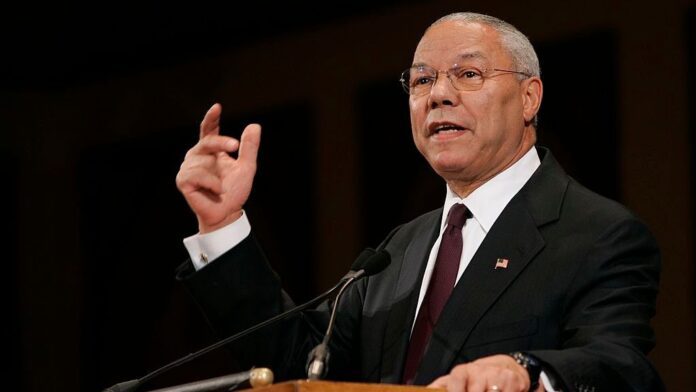 In life, Gen. Colin Luther Powell, the son of Jamaican Anglican immigrants, rose to become a four-star general, a White House aide to four presidents, chairman of the Joint Chiefs of Staff, and the first black American to serve as secretary of state.

“We have lost a remarkable and loving husband, father, grandfather and a great American,” Powell’s family announced on Facebook after Powell’s death at age 84 on Oct. 18.

“Colin embodied the highest ideals of both warrior and diplomat,” President Joseph R. Biden Jr. said in a White House statement. “He was committed to our nation’s strength and security above all. Having fought in wars, he understood better than anyone that military might alone was not enough to maintain our peace and prosperity.”

Biden called Powell a “patriot of unmatched honor and dignity” and ordered government flags to fly at half-staff for a man whose life transcended race, political party and even those he served in the White House.

Former President George W. Bush recalled Powell as “a great public servant” who was “such a favorite of presidents that he earned the Presidential Medal of Freedom — twice.”

“He was highly respected at home and abroad. And most important, Colin was a family man and a friend.”

Former President Obama said Powell was an “exemplary soldier and an exemplary patriot.”

“I join millions of people around the world in mourning the passing of Secretary Colin Powell,” Bishop T.D. Jakes said on Twitter. “He was a role model to all Americans and epitomized the greatness of America.”

“Gen. Powell was a trailblazer, statesman, and a great friend and supporter of the National Urban League,” Morial said. “His tireless service to the nation and its highest ideals serves as an inspiration to all Americans. His passing is a tremendous loss.

“Gen. Powell will be remembered as a man of principle, courage and strength, who never wavered in his determination to hold America to the highest standards. He is a role model whose life story will inspire generations of public servants who put the interests of the nation first regardless of party affiliation.”

Powell, a professional soldier for 35 years, was an Army captain when he served his first tour of duty in Vietnam in 1962-63.

But long before Powell arrived in Vietnam, he was molded at the altar of the Episcopal church.

In an Episcopal publication, “The Living Church,” Richard A. Best Jr. reviewed one of Powell’s memoirs, saying love of God and country were a vital part of his grooming.

“Although his autobiography has drawn a wide readership, few reviewers have noted the general’s lifelong devotion to the Episcopal church,” Best wrote. “The son of Anglican immigrants from Jamaica, Gen. Powell grew up in St. Margaret’s (in the Bronx), the neighborhood parish where he served as an acolyte and came to love the splendor of Anglo-Catholic liturgy. “

Best recalled Powell’s statement: “The higher the church, the closer to God; that was how I saw it.”

The Powells later attended All Saints Episcopal Church in Dale City, Virginia, for many years.

“And at the heart of this life stood our church,” Powell wrote in his memoir. “I was following in my father’s footsteps, counting the collection and depositing it in the bank; Alma [his wife] was following in her and my mother’s footsteps, working on rummage sales and the altar guild. I watched Mike and Linda assisting at Mass, and saw myself in my cassock waving the incense burner before the altar on Kelly Street. The tradition had been passed to the next generation, from one St. Margaret’s to another, like an endless stream.”

Born on April 5, 1937, in Harlem, Powell took advantage of opportunities at City College of New York and Army ROTC to earn a commission that elevated him to a decorated military career.

In college, Powell went from leading his Army ROTC drill team to commanding the entire unit.

Though Powell held many White House posts, his close associates said he was most proud of receiving his fourth star and becoming chairman of the Joint Chiefs of Staff.

Powell entered the Army after graduating in 1958 and later served two tours in South Vietnam, where he was wounded twice, including during a helicopter crash in which he rescued two soldiers. He was promoted to brigadier general in 1979.

Later, groomed by former President Ronald Reagan’s national security adviser Frank Carlucci, Powell became part of a small group of White House aides known as “the Vulcans,” who kept a keen eye on the former Soviet Union and helped to topple that regime.

Under the elder Bush, his reputation grew in the wake of the U.S. victory during the Gulf War.

But Powell had no desire for a political career of his own, though at times he was encouraged to run for president.

When Powell was nominated as secretary of state in 2001, he said, “I think it shows to the world what is possible in this country. &mldr; If you believe in the values that you espouse, you can see things as miraculous as me sitting before you to receive your approval.”

In a critical turning point in his career, in February 2003, Powell delivered a speech before the United Nations in which he said that U.S. intelligence had shown that Iraq had misled inspectors and hid weapons of mass destruction.

“There can be no doubt,” Powell warned, “that Saddam Hussein has biological weapons and the capability to rapidly produce more — many more.”

But two years after that speech, a government report said the intelligence community was “dead wrong” and Iraq’s mass destruction capabilities were far less than Powell had stated.

Produced in association with ReligionUnplugged.