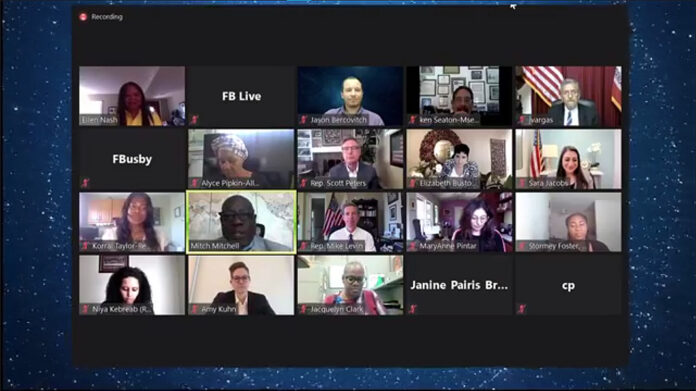 Photos by Vayunamu Bawa via Zoom

The American Rescue Plan Act of 2021 is the $1.9 trillion economic stimulus package passed by Congress and signed into law by President Joe Biden to combat the effects of the pandemic. The San Diego Chapter of the Black American Political Association of California (BAPAC SD) held an information packed virtual forum with congressional leaders on how this legislation would specifically benefit Black families. The event was held on Thursday, June 3rd, 2021.

With a lot of resources going to families such as the stimulus checks, the American Rescue Act is legislation that “could rebuild the Black community up to the Black middle class,” BAPAC SD Chair, Ellen Nash, said. “This is a moment of history.”

Moderator Mitch Mitchell thanked the panelists ‘for being informative for the community. So many things [are] happening at this very moment around COVID, the American Rescue Act, infrastructure, and what’s coming. To share your knowledge and your insight is very, very important.”

Congresswoman Jacobs echoed Ms. Nash on the importance of rebuilding the Black community in an equitable fashion. “In the last few years, our country has started to face up to the long history of systemic racism and racial injustice in America. Groups like BAPAC have been talking about these issues for a very long time and when we look at all that’s happened since the pandemic began, it’s inescapable that the Black community paid one of the heaviest tolls,” Jacobs said.

Congressman Peters spoke on the $130 billion going towards reopening K-12 schools safely with reduced class sizes, buses, support staff and so on. “We learned the importance of schools as a child-care mechanism. To really reopen this economy, we’re going to need to do something about child-care and make sure it’s accessible to everyone,” he said.

Congressman Vargas honed in on housing insecurity, another big problem. Only 2% of the amount of funds the city and state has received for Rental Assistance has been allocated so far. “I think a lot of people haven’t gone out to get the money because they’ve had forbearance on their rent and mortgage,” Vargas said. He encouraged those in need of assistance to go after it, because forbearance is temporary.

Giving debt relief to Black farmers is a part of the bill Vargas was also passionate about. “One of the things we need to do is reparations. There’s a reason African Americans have not been able to be as wealthy as white Americans and it’s because they had things taken from them—farms, opportunities, voting, infrastructure. It’s time we do something about it and we did in this bill,” he said.

All noted the digital divide in internet connectivity and learning. Peters talked about educating young people for the next economy and having conversations about trade and technical education. On creating jobs and getting people back to work, Vargas spoke on the excess funds California is sitting on – some $95 billion dollars, he said – and the importance of those on the ground working to access it.

“Whether it’s jobs or housing policy, you have an administration that is completely on board with trying to right some of the historic wrongs,” Congressman Levin said.

Much more was discussed last Thursday evening. Nash raised the call for collaboration and communication to create “good trouble” and emphasized, along with Mr. Mitchell, the surplus of monies that we are ‘in a good fight’ to equitably receive. To view the substantive 90 minute talk, visit BAPACSD’s facebook page or visit their website at www.bapacsd.org.