The criminal trial of Bill Cosby ended on Monday after defense called just one witness—a detective who had earlier testified for the prosecution.

Judge Steven O’Neill declined to allow Cosby’s attorneys to call a witness whom they said could corroborate telephone calls Andrea Constand made in attempts to get phone records, so she could fix her story before she went to a civil lawyer and police.

So, the defense only called Detective Richard Schaffer to enter certain phone and other documents into the official record.

The adverse ruling for Cosby continued a strange trend in which O’Neill has repeatedly gone against requests made by the defense. The ruling is particularly odd when, in most circumstances, a judge would grant certain leeway to a defendant facing serious charges that could conceivably land him behind bars for the rest of his life, according to several court observers.

Cosby, 79, faces three counts of aggravated indecent assault in an incident with Constand that allegedly happened in 2004. He could receive up to 30 years in prison if convicted.

In a blistering, closing argument, Cosby’s lead defense attorney Brian McMonagle pleaded with jurors to issue a “Not Guilty” verdict.

“Not just beyond a reasonable doubt, but find him not guilty,” said McMonagle.

He pointed out the many inconsistencies that Constand made to police, including that she had told authorities, in a sworn statement, that she and Cosby had never been alone prior to the alleged incident, a claim that the defense proved wasn’t true.

She also said they had maintained very little contact, which also wasn’t true.

However, McMonagle pointed out that, under oath, Constand admitted that she had been alone with Cosby at his hotel room during a late night rendezvous at the Foxwoods Casino where Constand admitted to enjoying a cognac, exchanging gifts and lighting a fire before laying on the bed with Cosby.

The former Temple University employee later crossed out the line in her police statement that said they had lay down in bed together, a point McMonagle also seized upon.

“Let’s stop this,” McMonagle told jurors, raising his voice. “Let’s call it what it is—a romance.”

Further, McMonagle showed jurors phone records that revealed that, after the alleged incident, there were 72 telephone calls made between Cosby and Constand. The comedian made 19 of those calls to his former love interest while Constand called her ex-suitor 53 times.

Constand claimed she made those calls as part of her job as director of basketball operations at Temple, but McMonagle reminded jurors that Constand had already quit her job and one of the reasons Cosby offered her a Benadryl tablet was because she had called him telling him how stressed she was about the direction of her professional career. 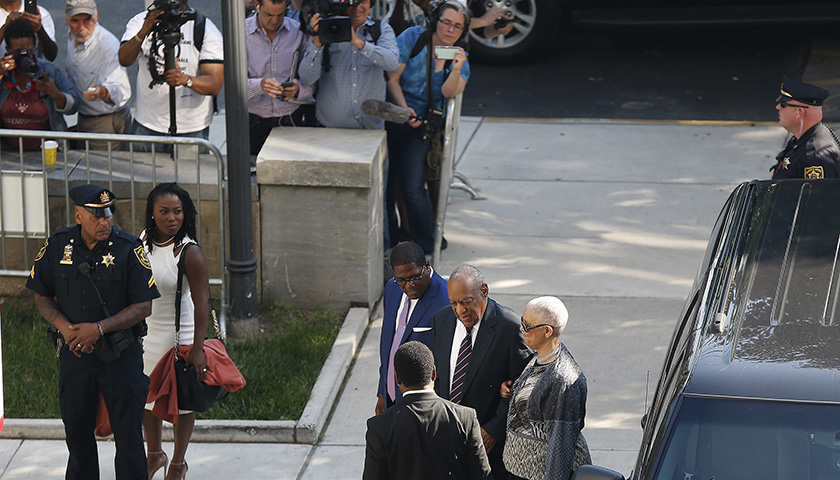 Bill and Camille Cosby, at right, arrive at the Montgomery County Courthouse in Norristown, Pa., on June 12, 2017. Cosby is on trial for sexual assault. (POOL PHOTO)

In one of McMonagle’s “Ah ha!” moments, he pointed out Constand’s statement about when she arrived at Cosby’s residence the night of the alleged assault.

“I thought about this and thought this is why [she changed her story, changed dates]. It hit me. The question [posed to Constand by investigators] was what did you do when you reached the entrance of Cosby’s house. She said, ‘I called him from the street and told him I was here and could I pull into the driveway. I was on my Nextel phone owned by Temple,’” McMonagle noted.

The attorney said, with all of the cell phone records in the case, he hadn’t until a week ago looked up that particular call which, after checking, never happened.

“I went day by day to see if her Nextel call happened,” McMonagle said. “But, no, she’s calling New York. I keep going, I gave her February, no, no, no. Why’d she move the date?”

McMonagle also told jurors that, after an exhaustive investigation in which Constand had changed her story several times while Cosby’s statements remained consistent, former Montgomery County District Attorney Bruce Castor determined that there was no evidence to support a prosecution and closed the case.

The high-powered attorney also pleaded with jurors to not make Cosby pay for his infidelities. Pointing to Cosby’s wife, Camille who sat in the first row on Monday, McMonagle said “When you dance outside of your marriage you pay… she deserved better.”

Still, he said, “hopefully, you will have the last two words in this case, and I pray those words are ‘not guilty.’”

District Attorney Richard Steele countered in the state’s closing arguments that Cosby had ingratiated himself into Constand’s family, and took advantage of his role as her mentor.

“Three friends, I have three friends to make you relax,” Steele said of the Benadryl Cosby gave Constand. “She’s asking for career advice. When you look at his own words, he’s guilty. He gives her drugs, he puts his fingers in her, he knows what effects the drugs have so there’s but one conclusion in this case and that’s out of his own mouth, that’s the case you have to decide.”

Cosby declined to testify in his own defense. After the judge’s final instructions, the jury was expected to begin its deliberation.