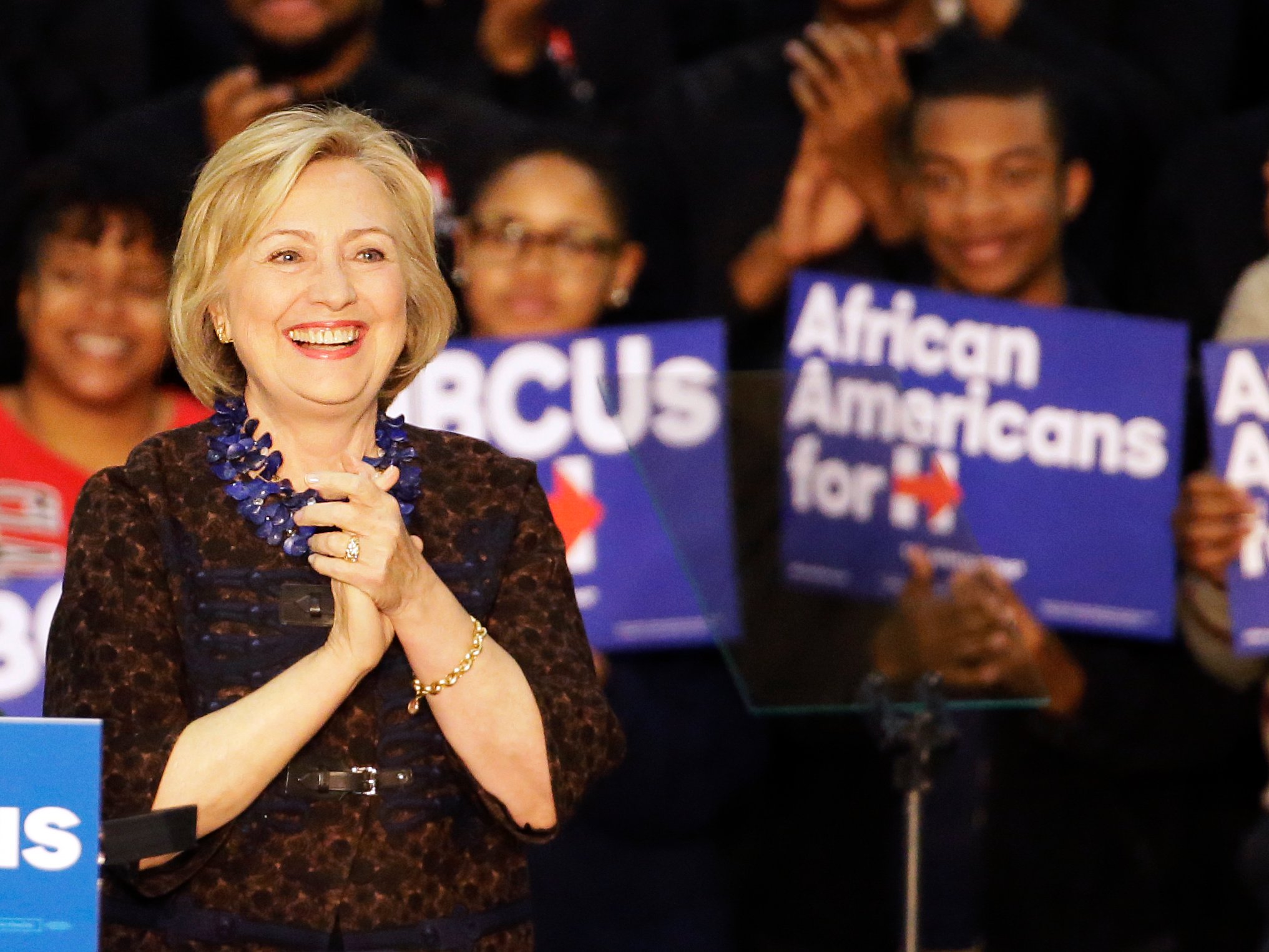 [RALEIGH] In an exclusive interview with North Carolina’s African-American press, Hillary Clinton said that even though she is running to benefit all Americans, the first woman expected to be elected president of the United States on Nov. 8th does have a special focus on working with the African-American community and its leaders — both local and national — to improve employment, business, education, and other important quality of life issues.

“I want to pay particular attention to Americans who feel left out and left behind by the economy, or the situation in their communities,” the former First Lady, senator and United States Secretary of State said Oct. 23rd at St. Augustine’s University in Raleigh, a historically Black college, during perhaps one of her last sit-down interviews of the campaign.

“I’ve laid out a really extensive agenda for African-Americans, starting with improving the economy so that its producing more jobs for more people; raising the national minimum wage – [we’ve] got mostly women earning minimum wage, often times being the sole support of their children, and they deserve a better economic opportunity,” she said. Clinton also cited more affordable housing as a need.

She maintained that getting equal pay for women as a “particularly big issue for African-American women,” adding that black female small business owners are “the fastest growing segment of the small business world in our country.”

“[But] they’re running into credit… [and] regulatory problems. We’ve got to look at those, not just from a 30,000-foot view, but right down on the ground. What is it that stands in the way of men or women getting their businesses going?”

Improving higher education not only through the proposal that she and Senator Bernie Sanders (D-Vt.) have developed to make public universities “tuition-free” for students from families making $125,000 or less, but also creating a “dedicated $25 billion fund” to help private historically Black colleges and universities (HBCUs) like St. Augustine’s and Shaw universities to continue to grow.

“Taking on systemic racism,” something she has “talked very openly and specifically about,” is something Clinton added to her pronounced agenda for African-Americans. She points towards reforming the criminal justice system “from end to end” to help stem the tide of questionable fatal police shootings of black people, improving police training, and building greater respect between law enforcement and the African-American community.

“I particularly want to provide more diversion from the criminal justice system and more second chance programs for people who have paid their debt to society so that we begin to reverse what has been an over incarceration that has really disrupted communities.”

“But I also have to do more to heal the divides that we face in our country, and I’m taking all of this on because I want to build on the progress that Pres. Obama has made. I don’t want to see it reversed or ripped away.” And yet, a “President” Hillary Clinton’s approach would be from “a different perspective that will hopefully get even more people listening,” she said.

Clinton certainly disagrees with Donald Trump’s assessment that African-Americans “live in hell,” instantly exclaiming, “Oh, that’s so wrong,” and then adding “One of many insulting, divisive comments that Trump made was his characterization of African-American communities. It just shows he’s never been in any, he doesn’t know any people, he has no idea of the dynamism of small business or the importance of historically black colleges and universities, or the role that black churches play, or black professionals, and every walk of life.”

Clinton continued: “He has characterized in such a negative way what I see as a part of America that has a lot going for it, but [also] has some challenges that we must honestly address.”

Clinton expressed support for South Carolina Congressman James Clyburn’s “10-20-30” plan – ten percent of federal funds should go to the twenty percent of communities that have been living with generational poverty and lack of development for thirty years. Clinton says she’s developed a plan that not only implements 10-20-30 into the federal budget, but also the empowerment and enterprise zones that helped build Black businesses under President Bill Clinton’s “New Markets” tax credits to be able to further invest, and hire people within their communities.

Mrs. Clinton said she’d like to see “a much bigger effort” when it comes to upgrading skills training so that more people can actually qualify for the 1.2 million available jobs in the marketplace. She says she wants to accomplish this challenge literally on a “neighborhood by neighborhood” basis, working with local officials, businesses and faith leaders who know the most about their own communities, and bring different perspectives to the table.

She furthered that she was “proud” of the efforts of both United States Attorney General Loretta Lynch and her predecessor, Eric Holder, combatting unconstitutional voter ID laws in North Carolina and across the nation. However, Clinton also blasted the United States Supreme Court for striking down Section 4(b) of the 1965, effectively taking away the Justice Department’s most effective tools in policing how various states are upholding the 1965 Voting Rights Act (VRA).

Clinton lamented that the High Court crippled the VRA, especially since Democrats and Republicans in the United States Senate when she served voted 98-0 to renew the VRA, and then-Pres. George W. Bush signed it.

“I want to appoint people to the [United States] Supreme Court who understand, based on what you read in the Fourth Circuit [and other court findings against Republicans trying to suppress the vote]. I also want to go back to Congress and try to get legislation to fix the heart of the Voting Rights Act…” noting that Congressman John Lewis (D-Ga.) is leading a bipartisan effort now “…to reinstate the full reach and power of the VRA.”

Clinton lauds President Obama’s leadership in getting the country out of the greatest financial crisis since the great Depression – an economic collapse she says was caused by a combination of huge tax breaks for the wealthy, and Republicans taking the regulatory eyes off of Wall Street and the financial markets. Clinton says that Obama “doesn’t get the credit that he deserves for pulling us out of that big ditch.”

She credits the president’s “steadiness” in guiding the economy with a substantial stimulus and recovery package and the reinstatement of a higher tax rate on the wealthy, all resulting in over 75 consecutive quarters of economic growth. Last year until now, Clinton adds, more people are finding work, incomes went up and more people are entering the jobs market.

“I want to build on that foundation,” Mrs. Clinton says of Pres. Obama’s achievements, “and I don’t want to see it ripped up and thrown away by a false ideology that the way you create economic wealth and equality in America is top down. I think its middle out, and bottom up. I will build on what the president has done.”

The Carolinian is a member publication of the National Newspaper Publishers Association. Learn more about becoming a member at www.nnpa.org.