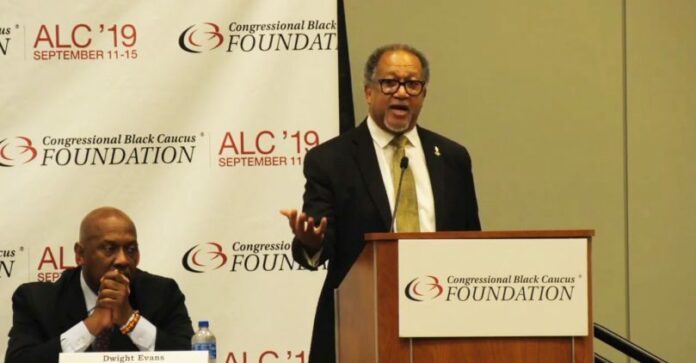 The panel’s theme was “Nation Building Through the Black Business Community: The Next 50 Years.”

The discussion centered on the various needs of black businesses. And, it was blunt.

“In the black community, black businesses often get caught up in getting business loans but not paying attention to the cost of the loan,” Busby said. “If you don’t have enough money when you start your business, that’s a factor of failure. African Americans are paying 19.85 percent interest for credit while white people [who often have worse credentials] pay 10 percent,” he said.

Sitting next to Congressman Evans in the Walter E. Washington Convention Center, which was teeming with politicians, Busby slammed the federal government.

“The government is the biggest spender by far,” Busby said.

Malveaux said economic envy has always been the biggest obstacle in building black wealth. “Economic envy prevented black people from accumulating wealth, and this is why the reparations story is an important story,” Malveaux said.

“Economic envy is what lynching was about. It wasn’t about sexual relationships, Ida B. Wells documented that,” she said.

After Chavis noted the demise of Ebony magazine, Edmond said it’s important for black publications to stay the course. “At the risk of being the bad kid on the panel, let me say that it’s not difficult to keep black magazines alive. It’s impossible,” Edmond said.

Edmond also lashed out at a long-standing belief on how long a dollar stays in the black community.

“It’s been reported and re-reported over and over again that a dollar circulates in Asian communities for a month, in Jewish communities approximately 20 days and white communities 17 days, and just 6 hours in the black community. That is not true,” Edmond said.

“We researched this over and over at Howard University and could never find a study that was done to show this. We need to stop spreading this. It’s just a tool used against us. What we should say is that we need to spend more in our community.”

Clark said black businesses should stop viewing each other as competition. “The future of business is not competition,” Clark said. “It is collaboration and working together.”

Evans said he’d welcome an encore for the panel, mainly if it meant helping black businesses. “When I came to Washington, I wanted to be on the Small Business Committee because the area more than any other that effectuates the black community is wealth building,” said Evans. “You’ve got to build wealth.”

Chavis also pledged that the Black Press would continue to push efforts to encourage wealth building in the African American community.

“This is a vital issue,” Chavis said. “For the discussion, we wanted to come after this from different perspectives, and this was a great discussion,” he said.