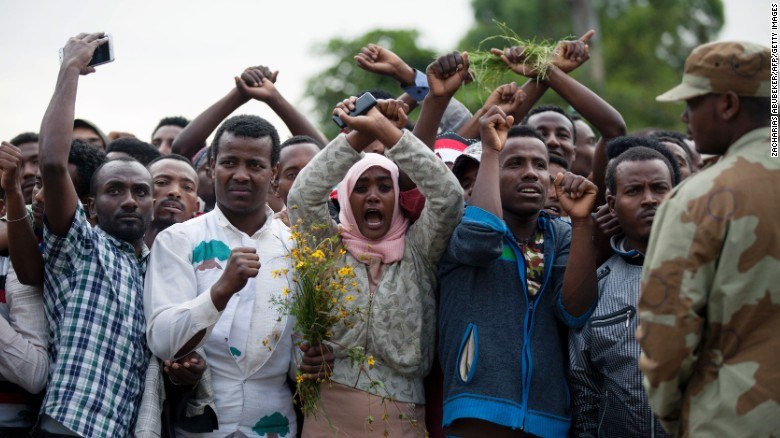 Forced by persistence public protests, Ethiopia’s Prime Minister Hailemariam Desalegn has today dismantled the previous government and formed a new one by announcing a major reshuffle of his cabinet ministers only a year after they were sworn in.

Accordingly, the House of People’s Representatives (HPR), whose 547 seats are entirely controlled by the ruling EPRDF and its affiliates, has unanimously approved the new 30 cabinet ministers proposed and presented by Prime Minister Hailemariam.

Of the 30 previous members of the cabinet, PM Hailemariam appointed 15 new ministers, of whom five are non-party members – a conspicuous departure from the party’s tradition. He reshuffled six ministers from the previous government to hold different ministry offices, while the remaining nine retained their former positions.

The major change in the 21 new ministers was however the replacement of Dr. Tedros Adnahom as Minister of Foreign Affairs and Getachew Reda, Minister of Government Communication Affairs Office. Both are now replaced by two senior officials, Dr Workneh Gebeyehu and Dr Negeri Lencho respectively, from the OPDO, the sister party governing the Oromia regional state, a region rocked by non-stop protests in the last one year. The list for the other new ministers is as follows:

Ethiopia is currently under a six-month State of Emergency declared on Oct. 8th, the first since the ruling EPRDF came to power a quarter century ago. The state of emergency was declared following fresh intensive protests in Oromia regional state which was triggered as an immediate result of a mass death of civilians at the annual Oromo Thanks Giving, Irreecha, festival, on Sunday, Oct. 2nd,

These protests, which grew into the ultimate form of public rejection of the incumbent, started barely one month after the previous government was formed following a 100% election win by the ruling EPRDF and its affiliates in the May 2015 general elections.

The ongoing protests in the two regional states have prompted a formidable opposition to the ruling EPRDF that was not seen in 25 years of its reign.