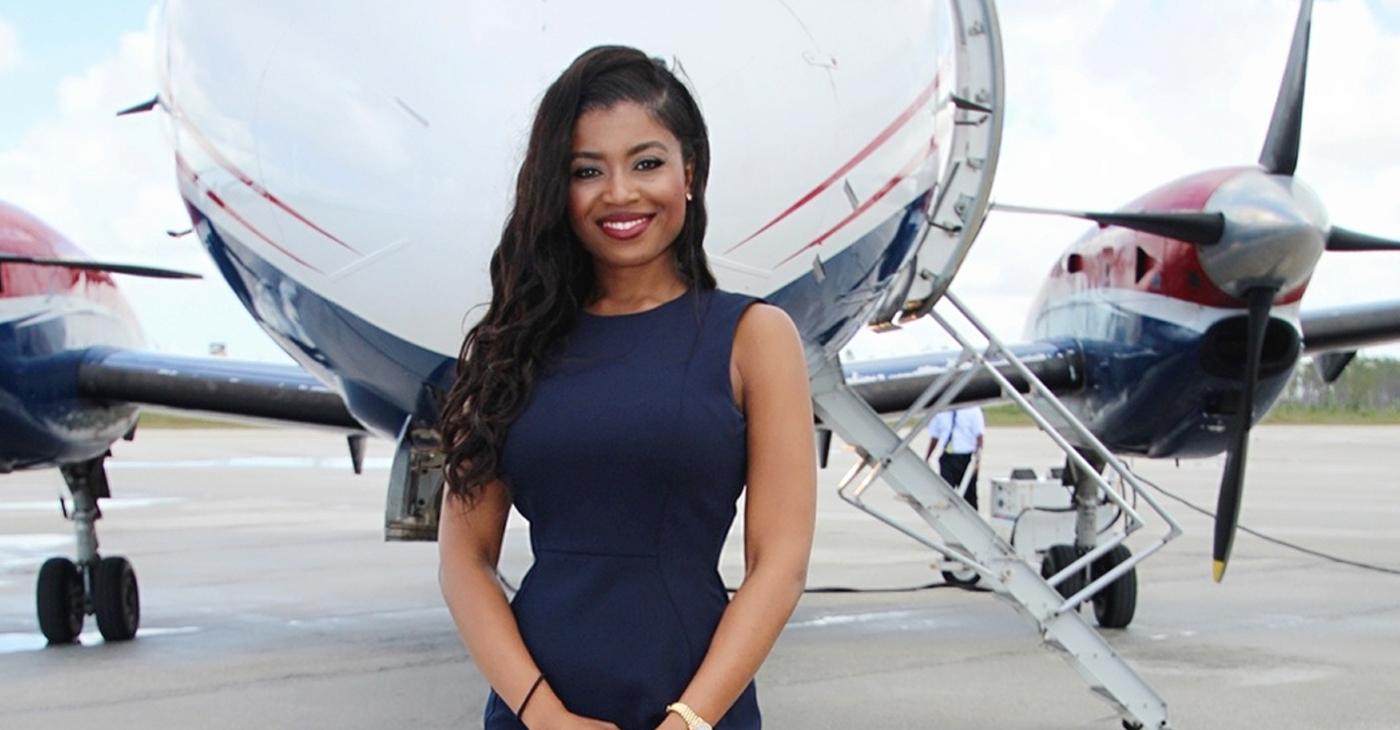 Although she acknowledges setting “big goals,” Sherrexcia “Rexy” Rolle said the magic really happens in the small steps it takes to reach those ambitions.
“That’s where the victories are won, in your daily to do list,” said Rolle, whose boardroom and classroom accomplishments likely turn as many heads as her modelesque looks.
At 30, Rolle serves as vice president of operations and general counsel of Western Air Limited, her family’s company and the largest privately-owned airline in the Bahamas.
She’s climbed the corporate ladder, but nothing was handed to her – Rolle clearly has earned her wings. “My family instilled a very strong work ethic in me as a child. We strongly believe in the principle of big faith and hard work,” Rolle said.
Western Air, a commercial airline that operates daily scheduled and on-demand flights to major destinations throughout the Bahamas, including Nassau, Grand Bahama, Exuma, Bimini, Abaco, and San Andros, also provides charter services to the Caribbean, Central and South America.
In business since 2000, Western Air was founded by Rolle’s parents, Rex and Shandrice. The airline conducts an average of 42 flights per day, 365 days a year and has a team of 165 employees.
“My dad was a private pilot at the time and my mom was an international business major, just graduating college,” Rolle said.
“My Mom and I went to Andros for my great grandmother’s funeral and on our return, we were stuck at the airport for almost the entire day. I remember her and I saying, that there must be a better way to travel from one island to the next,” she said.
“It wasn’t difficult to convince my Dad who is an aviation enthusiast. We sought financing for one aircraft and the aircraft financier believed so much in the idea and offered to finance three aircrafts, zero down as a package,” Rolle continued.

Rolle’s family wasn’t rich, as her dad was one of 13 children who came from very humble means. “My parents’ journeys, the good and the bad, inspire me and are what makes me believe that I can do anything with God, hard work and dedication,” she said.
Rolle, who is originally from Mastic Point, Andros in the Bahamas, grew up in Fort Lauderdale, Fla. After attending eighth and ninth grade in Andros, she attended Montverde Academy, an international boarding school.
Rolle completed her undergraduate studies at the University of Ottawa in Canada where she excelled in a joint honors program in Political Science and Communications. Later, Rolle earned a Masters in Mass Media and Communications at Lynn University in Boca Raton, Fla. After graduating from Thomas Jefferson Law School in San Diego, Rolle was admitted to the State Bar of California.
Rolle, who also has done some modeling, enjoys a passion for music and entertainment.
She enjoys acting, singing, songwriting and dance and promises to soon “unveil her growth artistically, and put [her] long-standing love for all things music and entertainment to good use.”
She’s working on new music she believes will be a hit. “Music enhances our consciousness. Depending on what I’m listening too, it makes me think about where I am in life, and what I’m doing.
“I’ve listened to songs that have made me feel fearless, songs that have inspired my thoughts on love and relationships, songs that have strengthened my daily hustle, or encouraged me not to take life so seriously and of course, songs that make me dance instantly. Music inspires me in more ways than one,” Rolle said.
Still, her beginnings at Western Air proved quite humbling.
She started as a baggage handler and worked her way up to vice president of operations, eventually orchestrating several strategic acquisitions for the airline – the first of which were two Saab 340A and a multi-aircraft deal with Embraer for the acquisition of three ERJ 145 LR 50-seater jets.
Rolle also is training to become a pilot, having logged more than 44 flight hours.
“When I realize what an impact Western Air plays in people’s lives on the daily, it certainly motivates me to keep pushing and progressing to better their experience,” Rolle said.
While her family counts as role models, Rolle said she’s also inspired by Oprah Winfrey, who is the “Aunty in my head.”
“She inspires me because she seems to have mastered the art of balance and remaining in a state of gratitude, all while being courageous in various business and creative pursuits,” Rolle said of the Talk Show queen and magnate.
Life and her achievements haven’t been without obstacles, Rolle said. However, she noted that obstacles only serve to propel one forward because “once you’ve survived it, it sets the precedent to similar challenges.”
“I’ve faced the most obstacles when we sought to do things that were never done before. For example, when I was spearheading the opening of Western Air’s Grand Bahama Passenger terminal we got major push back on a number of levels because it was the first of its kind in the Bahamas,” she said.
“A passenger terminal with its own security screening, acting independently from the airport itself. Our ability to conduct such operations was challenged by major players in the industry.
“To say the least I had to cut our way through a number of legal red tapes, take the risk and seek approval from the authorities in the position to validate our right to operate.
“Opening the passenger terminal was a pivotal point for our company and was instrumental in securing market share on that route. I was a fairly new attorney at that time. While it was a bit intimidating, it was a rewarding experience.”
Rolle said she refuses to allow negative stereotypes to affect the way she does business or carries herself.
As a successful black woman attorney and executive in the airline industry, Rolle isn’t easily intimidated.
“For some, a lawyer or a VP of an airline should look and act a certain way, perhaps more conservative, perhaps older, white and male. But I thrive on being unapologetic about who I am,” Role said.
“My hair is big, my heels are high, but my opinion and work ethic is strong. I also understand there is a misconception that working in a family business is easy or that things are handed it to you. But we believe in demonstrating your individual value and earning your stripes,” she said.
Rolle continued:
“It’s an uncommon opportunity that I feel blessed to be a part of, but responsibilities are great. As long as I am producing results for the betterment of our passengers and our staff, I’m not moved by any pushback or resentment.”