Home Lifestyle Grace Covenant’s “A Blast to the Past” Soars 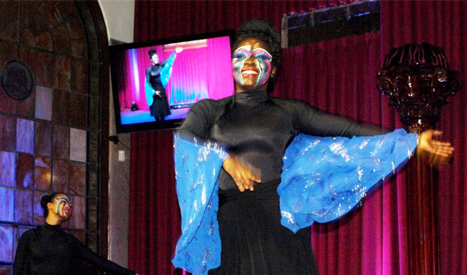 February 15-16, 2885 Clay Avenue, San Diego, CA: Grace Covenant Christian Church’s tribute to Black History, “A Blast to the Past!”, proved to be an educational, uplifting and show-stopping series of events spread over two days that highlighted centuries of Black accomplishment and victory. The commemoration began on Saturday morning with a down home breakfast and continued on Sunday afternoon with a moving multimedia theatrical mix of drama, dance, poetry, and narration combined with clips of authentic historical video.

Sold out nearly two weeks in advance, the Black History Breakfast featured a full menu of food for the mind, soul and body for over one hundred guests, many of whom were decked out in colorful African attire. Master of ceremonies Associate Pastor Peyton Harrison led a program that included tributes to ancestral leaders in pre-colonial African Kingdoms, more recent historical figures such as Langston Hughes and Marcus Garvey, and recognition of courageous fighters alive today such as Mrs. Gloria Brown, chairwoman of the Detroit Chapter of CORE (Congress of Racial Equality) from 1964 to 1967, and Mr. Jonas Bender, who was awarded the Congressional Gold Medal for his role in breaking the color barrier in the Marines. 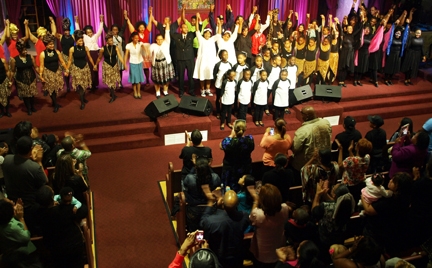 The drama production opened at 3:00 pm. to a standing room only crowd, with the main floor and both balconies full. Throughout the afternoon, it became clear that the audience was being expertly guided on a tour of African-American history like none other. African dance fused with Negro spirituals, historical narration punctuated by dramatic re-enactment, contemporary poetry juxtaposed with authentic historical news footage, plus the exuberant participation of all age groups; the Grace Covenant Dance and Drama department carefully orchestrated all of these elements under the theme of a museum exhibit brought to life to transform the audience from passive observers to active participants in a soul-stirring journey.

The Exhibit Curator, Senior Associate Pastor Deborah Williams, resplendent in African attire, led the audience through an extravaganza that included re-enactments of a slave auction, and police attacking peaceful civil rights protesters; delightful dances by the Grace youth, the Women in Ministry dancers and the Praise Angels of Compton; spoken word ministry by Diamond Wallace, plus visits from Dr. Martin Luther King (Youth Pastor Brandon Harrison), Jimmy Webb (DeJuan Lewis), Emmett Till (Malik Palmer), Myrlie Evers (Associate Pastor Jerri Harrison) and the Little Rock Nine. The action on stage was complemented by compelling video vignettes and spectacular stage lighting. During the grand finale as the cast of nearly seventy filed onto the stage to the thunderous standing ovation from a full house, it was clear that once more, an anointed Grace Covenant Christian Church production had touched hearts, moved minds and rekindled spirits.