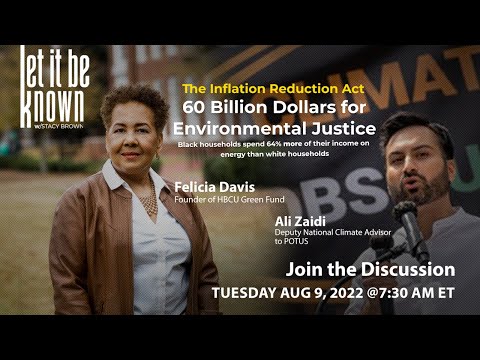 Consensus on climate provisions marks a historic step in the right direction for tackling the climate crisis that impacts Black people and people of color at disproportionate rates, the NAACP noted following Senate passage of the Inflation Reduction Act.

In a statement, the NAACP said Black and Brown communities have higher exposure to carbon emissions and all emission sectors.

Therefore, financial investment in climate issues and plans to reduce toxic emissions would be a vital step toward climate justice, the civil rights organization stated.

As the U.S. House of Representatives takes up the more than $700 billion economic package that includes healthcare, tax, and climate change, White House officials and climate justice activists said the bill would greatly benefit people of color.

“It puts the money with the mission. It’s a large amount of money, and the task in front of us is huge,” Felicia Davis, the co-founder of HBCU Green Fund.

“The challenge has always been accessing the resources to do whatever. We all would love solar panels and drive electric cars,” Davis stated.

“This legislation gives lower-income families access to those things, and it will make resources available if you’re buying new or used electric vehicles. Also, the funds are now available for small businesses who might want to install electric charging stations.”
Zaidi said the legislation would successfully tackle problems associated with consumer costs. In addition, he said it would create family-sustaining wages and significantly reduce or eliminate pollution.

“It’s really important for families right now. On average, this legislation will help cut annual energy bills by hundreds of dollars by helping families access technologies that are often out of reach, especially for low-to-moderate income families,” Zaidi continued.

“Things like solar panels on your roof, a storage unit in your garage, switching to electric heat, or an electric stove. It’s often hard for people to afford that upfront cost, but the legislation provides rebates and tax credits of up to $14,000 for low-to-moderate income families.”

“It makes it a lot more affordable for families. The equivalent price of charging electric vehicles is $1.20 per gallon, a huge shift that will save money,” Zaidi asserted.

“Also, by creating jobs that folks can work in this industry, we’ve put in the bill a lot of incentives and rebates that will help Americans expand the use of technology and the requirements for an apprenticeship. People will be able to raise a family with this income.”

Eliminating pollution counts among the most significant victories in the bill, Zaidi continued.

“Black and Brown communities tend to be where pollution is heaviest, and they are usually left out and left behind,” he said.

“There’s a targeted focus with a $60 billion investment in environmental justice which recognizes this issue and takes it head on.”

The bill includes a minimum 15% tax on most corporations that make more than $ 1 billion a year in profits and $369 billion for climate action – the largest investment in the issue in American history.

Overall, the bill will allow the U.S. to cut the nation’s carbon emissions by 40 percent in less than a decade.

“We don’t want to miss this opportunity,” Davis warned. “This is game-changing – transformational. We’re starting at ground zero, and we must grab it.”

Click here to view the full discussion with Davis and Zaidi.