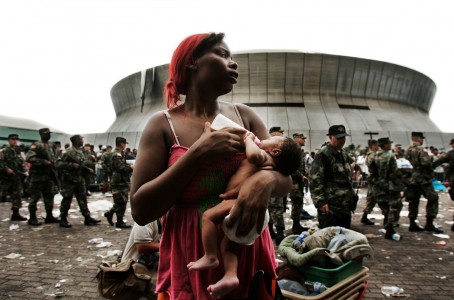 WASHINGTON (NNPA) – Just before Labor Day 2005, the world was stunned as images of Gulf Coast citizens, trudged through chaos and stagnant floodwaters, strewn with the debris of wrecked buildings and storm-tossed earth. The sights seemed to replay just before Halloween 2012, as coastal New York and New Jersey waded in icy waters and picked through the rubble of their destroyed property.

The incidents were separated by more than 1,300 miles, seven years, and two extreme weather events: Hurricane Katrina and Hurricane Sandy. But a new Web media project titled, Katrina/Sandy, juxtaposes the storms to suggest that disastrous scenes like these may be on repeat, as extreme weather becomes a new global reality.

“We’re not trying to say they’re the same event…. But it’s definitely a worthy thing to put [them] in context with each other when we think about, how do we respond better, how do we prepare better?” says Rachel Falcone, filmmaker, co-founder of Sandy Storyline (along with multimedia artist, Michael Premo), and co-creator of the Katrina/Sandy project.

“We’re trying to tell stories that can impact and improve the recovery after Sandy, or at least improve it so that…we learn from the mistakes we made during Sandy and especially during Katrina. And also the successes…not all the stories are sad stories. Communities are coming together to meet needs successfully and create solutions.”

Katrina/Sandy is the joint endeavor of two award-winning projects, Land of Opportunity and Sandy Storyline. Sandy Storyline is a crowd-sourced collection of Hurricane Sandy experiences, solicited and curated by a team of filmmakers. Land of Opportunity is a New Orleans-based multimedia project from a team of filmmakers that explores issues around housing; the Katrina/Sandy timeline is hosted as part of this larger project.

Created from donated footage and testimony from scores of local filmmakers and citizens around the country, Katrina/Sandy blends film, photography, and firsthand audio accounts into a powerful timeline before, during, and after the storms.

Viewers click points along the line and journey through footage of ravaging winds, relentless floodwaters, weatherworn residents, and weary homeowners. As the short films and accounts play, viewers can also segue to compelling documents, articles, and interviews that explore related issues.

In one scene from the Sandy accounts, a mother walks through her home, surveying gutted walls and detailing the bureaucratic ordeal of beginning the rebuilding process, as her young daughter wanders around calling out memories. In an accompanying scene from the Katrina footage, a father reflects on the 18 months he and his family have lived in a trailer on his property, waiting for the city to demolish his crumbling house so he can rebuild, as his young son plays nearby.

The similarities continue to unfold in straightforward, powerful vignettes. Notably, low-income residents share similar experiences of isolation and neglect. In Sandy’s wake, it is elderly and disabled people stuck in high-rise public housing units without electricity, heat, or medications. Post-Katrina, it is mostly Black people slogging through hazardous floodwaters, searching for food and dry clothing.

Scientists and researchers almost unanimously agree that extreme weather events like these have become and will continue to be commonplace, as a result of climate change. Low-income and underserved communities, often home to people of color, will continue to bear the brunt of the effects.

“Folks who don’t have resources are the hardest hit at every stage of disaster. Katrina continues to be an ongoing disaster for a lot of people, and that’s clearly the bulk of what’s going on on the ground in Sandy,” says Luisa Dantas, filmmaker, director of Land of Opportunity, and co-creator of Katrina/Sandy.

“When we talk about looking ahead, and learning, and preparing, it’s mostly around ensuring that folks who don’t have access to resources are protected, and cared for, and able to recover and rebuild their lives just like everyone else can.”

Marginalization of these communities continues in debates about land use, rebuilding, and the right to return in the aftermath of disasters. Outside this project, both Dantas and Falcone work on issues around housing rights; Dantas points out that this scenario plays out often around the country.

“Crisis isn’t just a disaster on the scale of Katrina, but we’ve been looking at stories all over the country of crisis being used as a real excuse for policies that displace people, that put a premium on development agendas that aren’t necessarily inclusive, and aren’t necessarily being directed by the communities where they’re set,” she says, citing Detroit’s economic crisis as an example and Katrina as an extreme case.

Sandy survivors are at the beginning stages of these issues.

“Right after the storm there was all these meetings the mayor convened around policy that were shocking,” Falcone says. “There were town hall meetings, there’s been a lot of discussion around policy…and around buyouts, and development, and who has a say in what’s happening to different areas that are trying to rebuild. So we definitely see similar issues. But for us we feel like it’s not yet written, so we wanted to invite people to help us tell that story.”

Viewers are invited to share their post-Sandy stories at Sandystoryline.com/participate/share-your-story, and the Katrina/Sandy timeline can be viewed athttp://beta.landofopportunityinteractive.com/#/compare.

Dantas and Falcone hope the timeline will help inform how people and officials prepare for this new normal.

“One really important thing to talk about with Katrina and the relationship to Sandy…is when a natural disaster becomes a manmade catastrophe. In the case of Katrina, the storm itself did not cause the lion’s share of damage. It was the epic failure of manmade infrastructure. And similar situations happened in Sandy recovery,” says Dantas.

“The Sandy anniversary is coming up and the decade of Katrina coming up in a year. The value of reflection isn’t just looking at what’s happened but also thinking about how what’s happened can be applicable to your own community. We’re really hoping that this work is driving home to people that this could happen to them, and if it were to happen to them, could they be better prepared?”

Stereotypes about girls dissuade many from careers in computer science