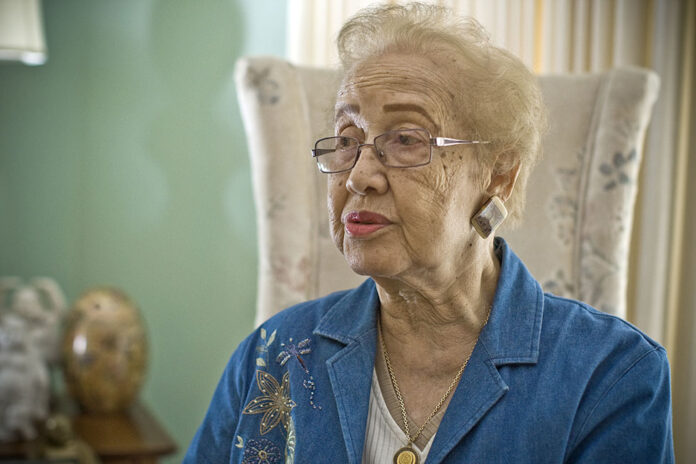 Katherine Johnson, the legendary NASA physicist and mathematician whose work played a key role in the early successes of the U.S. space program, passed away at 101 years old on the morning of February 24 in Newport News, Va. Johnson played a pivotal role in helping the U.S. land men on the moon during the space race in the 1960s and was portrayed by actress Taraji P. Henson in the 2017 film “Hidden Figures.”  The book based on the film by the same name was written by Margot Lee Shetterly.

With little more than a pencil and a slide rule Johnson calculated the exact trajectories for Apollo 11 land on the moon in 1969.  and, after Neil Johnson worked in a world where errors were fatal. 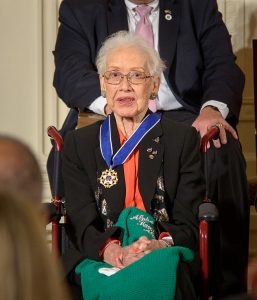 Former NASA mathematician Katherine Johnson is seen after President Barack Obama presented her with the Presidential Medal of Freedom, Tuesday, Nov. 24, 2015, during a ceremony in the East Room of the White House in Washington. (Photo: NASA/Bill Ingalls, Wikimedia Commons)

“We’re saddened by the passing of celebrated #HiddenFigures mathematician Katherine Johnson. Today, we celebrate her 101 years of life and honor her legacy of excellence that broke down racial and social barriers,” tweeted NASA after news of Johnson’s passing.

In September 1960 mathematician Katherine Johnson published NASA’s first scientific paper to name a woman as author. Johnson’s trajectory calculations were vital to the US space missions.

“There were no textbooks, so we had to write them,” Johnson said.

“It is with deep sadness that I learned of the passing of Katherine Johnson, a truly brilliant mathematician and pioneer. She broke down barriers as one of the few African-American women mathematicians working at the Flight Dynamics and Control Division at NASA Langley,” wrote Congressman Bobby Scott who represents Newport News, Va.

“Her work helped put the first Americans in space and send the Apollo 11 astronauts to the moon, thereby helping the United States win the Space Race. While I knew Katherine Johnson and her family personally for many years, like so many Americans I never fully appreciated the work that she, Dorothy Vaughn, Mary Jackson, Christine Darden and the many other African American women at NASA trailblazed for so many until their untold story was revealed in Hidden Figures. Mrs. Johnson was a true American hero, and we were so proud to have her call Hampton Roads home. I want to send my deepest condolences to her family and friends, and to everyone who was inspired by her remarkable life and work,” Rep. Scott added.

“Today we mourn the loss of an American hero and a pioneer for women and African Americans in STEM fields. Katherine Johnson played a pivotal role in the outcome of the space race during her 35-year career at NASA and its predecessor, NACA. Without her accomplishments and those of her fellow Hidden Figures, which went largely unrecognized until the last decade, the outcome of the Space Race may have been quite different. Her achievements and impacts on our country are great, and her loss will be felt by many. I send my heartfelt condolences to her loved ones and colleagues,” NASA said in a statement.

“We’ve lost an icon and brilliant mathematician with the passing of Katherine Johnson. A barrier breaker and inspiration for women of color everywhere, Katherine’s legendary work with NASA will forever leave a mark on our history. My heart goes out to her family and loved ones,” said Sen. Kamala Harris (D-CA).