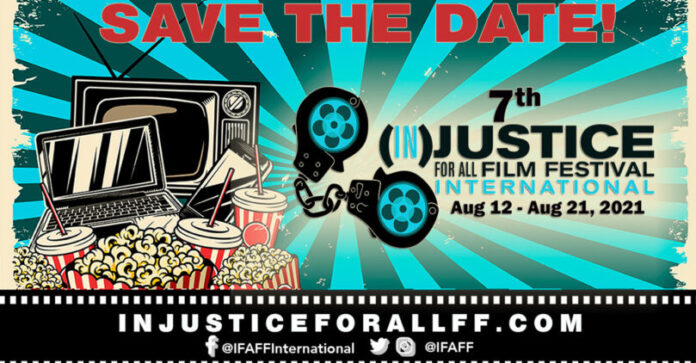 Trinity United Church of Christ, Senior Pastor Rev. Dr. Otis Moss III, and The Next Movement announce the 7th (In)Justice for All Film Festival (IFAFF), scheduled August 12-21. Because of the pandemic, this much-anticipated fest remains FREE of charge and will be virtual. This year, the IFAFF has partnered with Eventive, a well-established and respected virtual film distribution platform.
The IFAFF brings audiences films that explore America’s criminal justice system – police, courts, and corrections – and the industries that profit from this cauldron of human misery. Stories told include those of millions of people who are relegated to second-class citizenship under an unforgiving system. Stories also highlight how other countries are successfully addressing this issue, as well as showcasing best practices right here in America.
The virtual 7th IFAFF International will screen feature-length documentaries, feature films, and topical shorts, all with themes centered on the epidemic of mass incarceration, the criminal (in)justice system, racism and white supremacy, gun violence, police brutality, unfair housing, immigration, social unrest, and other human rights violations.
The film festival brings additional context to the films and their messages through a variety of panel conversations as well as the inclusion of spoken word segments. It also includes a film competition for new movies and “Justice Awards” for exceptional films that best demonstrate the challenges and tragedies of our broken justice systems. While the focus is on new films that are submitted into the competition, a variety of older films highlighting the historical perspectives of today’s challenges also are screened.
The Next Movement (TNM) was born as a response to a 2010 visit and lecture by Professor Michelle Alexander, author of The New Jim Crow: Mass Incarceration in the Age of Colorblindness, held at Trinity United Church of Christ. TNM, organized as a committee of the Trinity United Church of Christ Prison Ministry, is comprised of people of all races, ages, and religions who view mass incarceration as the key human rights issue of our time, and who are committed to building the mass movement necessary to alleviate it. Through education, awareness and organizing individuals and organizations, TNM is dedicated to mobilizing the “people power” necessary to make the systemic changes required.
The 7th IFAFF International will run over a 10-day period from August 12-21. Free tickets are available by visiting www.injusticeforallff.com or https://watch.eventive.org/injusticeforallff. In addition to screening films, this year’s festival will include grand opening events; spoken word interludes featuring exciting Chicago poets; special guest speakers; panelists/panel discussions providing context to the many films to be featured over the 10 days (dealing with organizing, restorative justice, domestic violence, immigration, bail reform, racism, eviction, and, of course, mass incarceration); and closing ceremony/awards events.

The magic of the festival derives from a committed, extensive group of partners who contribute their enthusiasm, relationships, and more to spread the news of the IFAFF International throughout Chicago and the nation. The fest will be featured entirely on a digital platform this year, available across the nation and throughout the world. Independent film houses, universities, justice organizations, faith communities, and select media outlets comprise the bulk of IFAFF partners. Major 2021 IFAFF sponsors include Trinity United Church of Christ – Unashamed Media Group, Coalition to End Money Bond, and Euclid Avenue United Methodist Church.
America imprisons more citizens than any other nation in the world. Currently, there are over 2.2 million prisoners, a rate of more than 698 per 100,000 citizens. This number does not include the accelerated detentions over the last several years associated with immigration, which in 2011, averaged more than 30,000 daily. As of March 2019, that figure rose to nearly 50,000. Currently, over 600,000 people reside in jails throughout America. The majority are awaiting trial, and, according to our system of justice, are presumed innocent.
IFAFF website address – www.injusticeforallff.com
Eventive IFAFF website address –
https://watch.eventive.org/injusticeforallff
Twitter & IG – @IFAFF
FB – @IFAFFInternational
Hashtag – #IFAFF2021