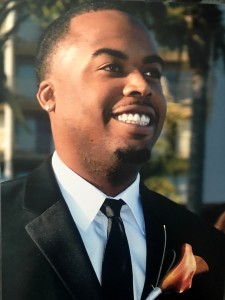 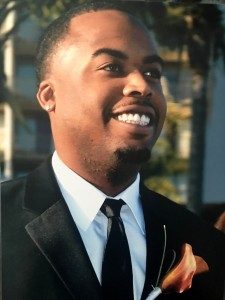 Services were held Saturday, January 30, 2016 at The Rock Church; interment at Glen Abbey Memorial Park. Final arrangements entrusted to Anderson-Ragsdale Mortuary. Jerrad Cardae Scott began his journey on February 15, 1991. Born the youngest of three boys in the city of San Diego, California to his parents Veda Jackson and Edward Kendall. At an early age he accepted Christ as his Lord and savior and attended Christian church. In 2009, he graduated from Monte Vista High School where he was an accomplished basketball, track, and football star. Soon after graduating, he dedicated himself to the family businesses that he managed and help grow. Jerrad was known for his infectious smile that brought joy to others around him. His astonishing personality and playful behavior allowed family and friends to remember him as being a goofy, generous, free spirit. An athlete growing up, Jerrad especially excelled in football, He also enjoyed food, with the ultimate dream of starting culinary school and opening his own restaurant. Most of all, Jerrad was passionate about family. His children, Cardae and Jayce were the most important part of his life and he always looked forward to Sunday dinners with his mother Veda and his brothers James and Jonathan. He was a hard worker with a positive attitude that would conquer any obstacle in front of him with a smile on his face. On January 17th 2016, Jerrad Scott passed away. To cherish his memory, he leaves his loving mother Veda Jackson and Father Edward Kendall, his children Cardae Scott and Jayce Scott, brothers, James Moore, Jonathan Moore, Tyrell, Tyrae and Khris, sister Sherelle, along with a host of cousins, relatives and dear friends.