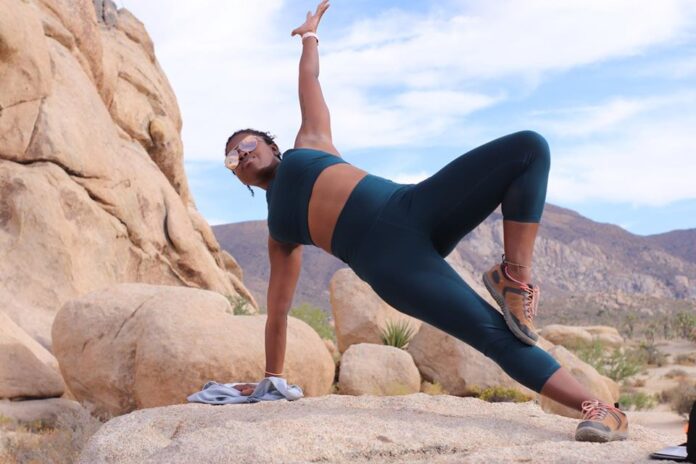 It’s after 10 a.m. on Sunday and mellow RnB sounds are playing in a Liberty Station studio space. Bri, a Southern California-based Health Educator, is in the middle of her weekly Soul Flow Sunday Yoga class where people of all various experience levels can practice. As a Black yoga instructor, her classes are unique because they are intended to be a safe and welcoming space for Black folks and other people of color.

Yoga, originally Indian, is a practice that engages both the spiritual and physical, encompassing mindfulness and exercise. Like a lot of cultural traditions in the US, it has been so whitewashed that the type of people who can benefit from this age-old discipline has become unclear. As more Black people revert to lifestyles and customs that are more reflective of their roots in and connections to the natural, however, yoga is being seen as a valuable practice to take up.

Bri initially took up yoga to help with sleep and stress management, which are some common reasons among Black people for trying yoga. As Black communities are increasingly plagued by trauma, stress, and a survival mindset that takes forms in different ways, dealing with issues of the mind has become more important than ever. Black people, though, are having to move through microaggressions or lack of familiarity with their life experiences in order to make use of yoga spaces, which ultimately hinders their ability to really enter a better headspace.

Movement, breathing, and meditation are key parts of the yoga practice. All of these encourage a connection between the body and the mind— the physical and the spiritual. Coming into an awareness of the body’s capabilities and the state of the mind is powerful. Regularly connecting with one’s thoughts as well as one’s surroundings significantly improves mental well-being, which is definitely necessary for members of marginalized communities. Being able to relieve stress and relax the mind while living through the numerous effects of oppressive systems is crucial; taking care of the self truly is revolutionary. While yoga is usually characteristic of privileged demographics, everyone ought to have access to a routine centered around improving mental wellness in community.

With her business Just Bri Free Yoga & Wellness, Bri seeks to create spaces where black folks can practice with those that look like them as a result of not always feeling welcomed in her past yoga experiences. A lack of representation and understanding in typical yoga spaces hinders the ability of Black people in yoga to get comfortable and enjoy the practice. It is important to black yogis like Bri that they can provide spaces where people who look like them and have similar backgrounds are more likely to escape even the probability of microaggressions and just be as people working towards personal development. The reality of yoga is that it is much more than an elite hobby for wealthy, white people; it is a valuable spiritual practice that more people can benefit from, especially in conducive spaces.