Home Business Marketers Should Show More Respect for the Black Consumer, According to a... 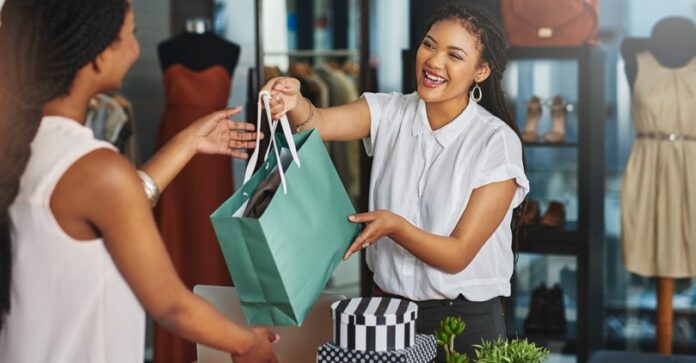 “Take a look at how African Americans make their decisions, whether it’s physically or digitally… what we found is that when it comes to making decisions, we abundantly are going to use recommendations as our first line of research,” Cheryl Grace, Nielsen’s Senior Vice President of U.S. Strategic Community Alliances and Consumer Engagement, told NNPA Newswire.

The influence of African American consumers is extensive.

Driven by their tech affinity, passion for sharing experiences, and powered by their omnichannel thirst for information and recommendations, the nation’s 48 million Black Americans are now just approaching their peak earning years, according to the Nielsen report, “It’s in the Bag: Black Consumers’ Path to Purchase.”

The 50-page report suggests that marketers should be aware that African Americans demand that product information and feedback opportunities integrate across multiple media channels.

African Americans are more likely than the total population to agree that advertising provides meaningful information on most platforms. However, companies that advertise directly to Blacks have decreased their investments. Advertising dollars targeted to Black consumers declined by $1 billion between 2017 and 2018, according to the Nielson report.

Nearly 40 percent of Black consumers saying that they are the first among their friends to try new products and services, surpassing the total population by 29 percent.

“Take a look at how African Americans make their decisions, whether it’s physically or digitally… what we found is that when it comes to making decisions, we abundantly are going to use recommendations as our first line of research,” Cheryl Grace, Nielsen’s Senior Vice President of U.S. Strategic Community Alliances and Consumer Engagement, told NNPA Newswire.

The report’s authors said Black Americans are 48 million strong, with nearly 25 million being millennial age or younger as of 2018.

However, they are already dominating industries from music to fashion, and many others.

African Americans also are creating apps and digital spaces to serve their own unique needs when the opportunity demands it, according to the report.

“In a world bombarded by constant new media options and technologies, companies that want African American consumers’ dollars must understand what most influences these consumers and how they influence others on their path to purchase,” Grace stated.

“Developing authentic strategies that evolve from listening to Black consumers’ needs and demands is not only the best way — but the only way — for brands to realize the powerful growth opportunity ahead.”

“African Americans have a $1.3 trillion annual buying power, and we watch 15 hours or more every week of traditional television,” Grace stated.

“You can reach 92 percent of African Americans in any given week on the radio. When you look at radio, and you compare the consumption habits of how much time we’re spending across these platforms, you’ll see that the advertising spent with African American-focused media doesn’t necessarily add up,” Grace noted.

Part of that problem is the lack of diversity at advertising agencies, she stated.

“There need to be more people of color in those firms,” Grace stated.

Perhaps a more diverse and inclusive workforce would enable marketers to better appreciate that African American interests are not monolithic. They encompass everything from good food, great music and the latest fashion trends to healthcare and the environment.

While climate change and protecting the environment is more vital than ever, African Americans typically are forgotten in the conversation. “African American shoppers are increasingly passionate about their environment, including buying local,” the report’s authors noted.

When asked, “how important is it to buy local” in multiple food categories, African American consumers named produce as the most important category for local sourcing.

Sixty-one percent said it was extremely or very important, followed by bakery and prepared foods at 56 percent, eggs at 55 percent, and dairy at 52 percent.

Understanding the environmental and safety concerns of Black consumers can help marketers understand what matters most to African Americans consumers in making decisions along their shopper journey, the report’s authors said.

The top 3 environmental/food safety concerns among Black consumers are: “Pesticide/ herbicide use in food production” (76 percent), “Antibiotic use in animal production” (71 percent), and “Rising prices due to trade tariffs” (68 percent – 21 percent higher than the total population).

The report concluded that the African American path to purchase is social and circular, with the transaction being a critical step in the process before consumers express their passionate feedback about their experience, be it positive or negative.

“Brick and mortar stores, online retailers and service providers should each strive to provide an experience that not only satisfies Black consumers, but creates buzzworthy raves that will quickly be passed on to friends, family and virtual networks in their discovery, awareness, and decision making processes,” the authors wrote.

“Developing strategies to connect with African American consumers, and assuring that their culture is understood and respected, as well as assuring that their expectations are exceeded, will provide far-reaching influence and growth throughout all consumers for many years to come in the evolving American mainstream,” Grace stated.